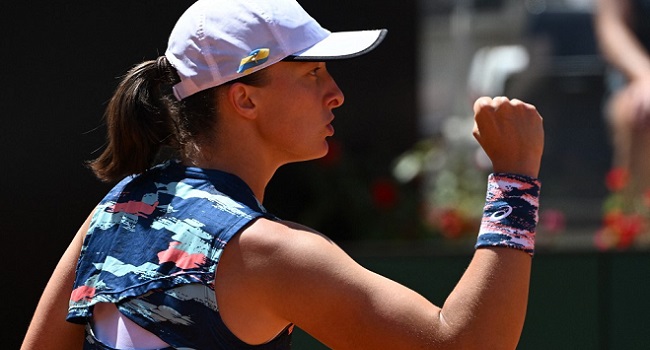 Iga Swiatek swept to victory at the Italian Open on Sunday, beating Ons Jabeur 6-2, 6-2 to retain the title and claim her fifth tournament crown in a row.

World number one Swiatek dropped to her knees in tears of joy after winning her 28th match in a row, and is red-hot favourite for Roland Garros which starts later this month.

“I’m going to celebrate with a lot of tiramisu!” Swiatek joked on court before adding “see you at the French Open”.

The 20-year-old Pole has dropped just one set in her last 20 matches and made light work of Jabeur, ranked seven in the world, in a largely one-sided final in Rome.

Jabeur had come into her first Rome final on a roasting Foro Italico centre court on the back of two thrilling comeback wins over Daria Kasatkina and Maria Sakkari.

Tunisia’s Jabeur had made history last week after becoming the first Arab or African woman to win a WTA 1000 title but could not extend a career-best 11-match winning streak against her relentless opponent.

“We’ve had a great run on clay… we will learn from this match and we will continue forward,” said Jabeur.

Swiatek came out all guns blazing and after winning the first three games came close to taking the fourth, failing to capitalise on two break points before Jabeur eventually got a score on the board.

After her heroics in the quarter- and semi-finals fans on the court were hoping for another fightback but by the time she started to show signs of life she was already too far behind.

Down in the second set Jabeur shanked a poor shot wide at break point in game two, and Swiatek then claimed the next two to move into an unassailable lead.

Jabeur then fired up the crowd by winning the next two and another unlikely comeback bid looked to be on when she had three break points in game seven.

However Swiatek took the game to deuce and saved another break point in a superb rally before taking the game, breaking Jabeur’s resolve and then moving on to take the title.

Later on Sunday Novak Djokovic faces Stefanos Tsitsipas in the men’s final, a rematch of their final at last year’s French Open which was a five-set thriller eventually won by the Serb.

Djokovic has already ensured he will be world number one for a record-extending 370th week and claimed his 1,000th career victory, against Casper Ruud, on Saturday night to reach the final. 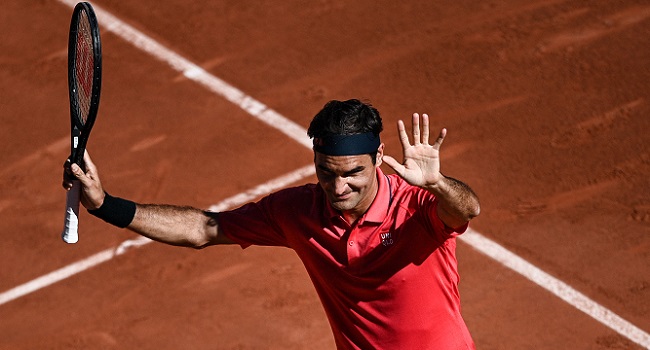 Roger Federer kicked off only his second French Open campaign in six years with an impressive dismissal of Denis Istomin on Monday, while reigning women’s champion Iga Swiatek and men’s second seed Daniil Medvedev both reached round two.

“It’s a great pleasure to return. It was important to have some rehabilitation and lots of training,” said Federer, seeded eighth.

Medvedev, who had lost in the first round in all of his four previous appearances in the tournament, put his poor clay-court form behind him by beating the dangerous Alexander Bublik 6-3, 6-3, 7-5.

Later on Monday, Serena Williams will play the first night-session match in the competition’s history.

The 23-time Grand Slam champion’s meeting with Irina-Camelia Begu of Romania will be played behind closed doors, though, due to a 9pm Covid-19 curfew imposed by the French government.

Federer arrived to Roland Garros having played only three matches since his Australian Open semi-final loss to Novak Djokovic last year, before the Covid-19 pandemic hit.

The Swiss great lost to Pablo Andujar in his first clay-court match of the season earlier this month in Geneva, but struck 48 winners as he raced to victory over Istomin.

But he has been keen to play down any thoughts that he can add to his 2009 Roland Garros title.

He is competing in the tournament for only the second time since 2015 and the first time since reaching the 2019 semi-finals.

Swiatek, who became the first major singles champion from Poland last October, hit 22 winners in an impressive opening to her bid for a second straight Roland Garros triumph.

“I tried to put it behind me (being defending champion) and kind of use it in a positive way because I just know that I’m feeling good here,” said the eighth seed, who was presented with flowers on court after the match for her birthday.

It is not just in Paris that Medvedev has struggled on clay. The Russian had lost eight of his previous nine matches on the surface dating back to 2019.

But the two-time Grand Slam runner-up was too strong for Kazakh Bublik, setting up a second-round tie against US player Tommy Paul.

“It was a good match and I’ve been training really well,” said the 25-year-old Medvedev, who lost the Australian Open final to Novak Djokovic in February.

“I’d never won at Roland Garros before so I really wanted to win today. To win in three sets was a brilliant match on my part.

“I struggled in recent tournaments on clay, the balls are suiting me this week though and I hope I can go a long way. I think I move well on clay but I sometimes struggle with getting the power.”

Medvedev is bidding to take advantage of being in the opposite half of the draw to 13-time champion Nadal, Djokovic and Federer, while fourth seed Dominic Thiem was knocked out on Sunday.

The early stages of the 2021 tournament have been overshadowed by Naomi Osaka’s controversial boycott of press conferences which have seen her threatened with disqualification from the event.

Her coach, Wim Fissette, told German magazine Der Spiegel on Monday that Osaka wants “to use her status to address problems”.

Organisers will be relieved that no other players have followed Osaka’s lead so far though.

“In my opinion, just having a good relationship in media, it can help you,” said Swiatek after her win.