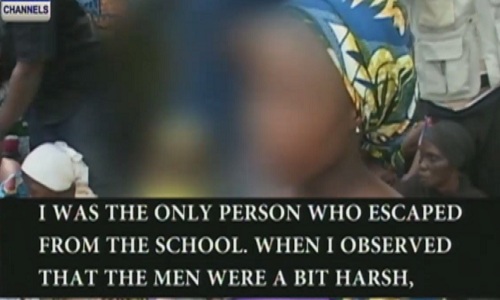 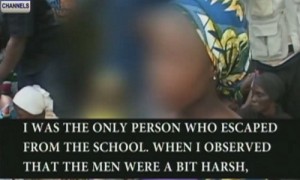 Some of the abducted girls from the Government Girls Secondary School in Chibok, Borno State, who escaped from the clutches of their abductors, have recounted their experience when the insurgents.

They spoke out on Tuesday, three weeks after their abduction by suspected members of the Boko Haram sect.

The girls, who were surrounded by their relatives and members of the community at the burnt down school premises, recounted their ordeal to the wife of the governor of Borno State, Nana Shettima.

One of the girls who spoke in the local Hausa language said she was the only girl who did not get into the vehicles brought by the insurgents.

“When I observed that the men were a bit harsh, I became suspicious. I ran and jumped the fence then I climbed a tree close to the school and stayed there. One of the men followed me with a torchlight and asked me to return but i did not answer him,” she said.

A recent report by the police put the number of girls that were taken away at 276.

The Borno State Commissioner of Police (CP), Tanko Lawan, said that “out of the 276 abducted students of the school, 53 female students have been rescued; while 223 are still missing.

They were abducted on April 14 by suspected members of Boko Haram the same day the group carried out a bomb attack on a motor park in Nyanya area of Abuja. The blast left over 70 people dead and scores injured. Several vehicles were also damaged.

Several efforts have been made to rescue the other girls, with President Jonathan reassuring Nigerians that the girls would be rescued.

On Monday, the leader of the sect, Abubakr Shekau, in a video, released by the group, claimed responsibility of the abduction and threatened to sell the girls in a market.

A group of sympathisers has converged on New York in the United States to campaign for the release of 223 school girls still held by suspected members of the Boko Haram sect that abducted over 270 girls from the Government Girls Secondary School in Chibok.

In a public demonstration, the protesters, comprising people from all walks of life, made an impassioned call for the girls’ release, counting down their numbers.

Though they are not directly linked with the girls, they came out in their numbers chanting; “Bring back our girls” as they protest in New York.

They held placards with different inscriptions, demanding the release of the girls who were abducted on April 14.

A similar protest by mainly concerned women and relatives of the girls is holding in Nigeria. The protest Started on Wednesday and the women had said they would not stop until a concrete action had been taken by the government.

A police report on Friday puts the number of the abducted girls at 276.

“So far, we have established that no fewer than girls were abducted at the Government Girls Secondary School (GGSS), Chibok on April 14, 2014 by suspected members of the Boko Haram Terrorist Group”.

“out of the 276 abducted students of the school, 53 female students have been rescued; while 223 are still missing; and suspected being held by Boko Haram terrorists in various parts of the state,” he said.