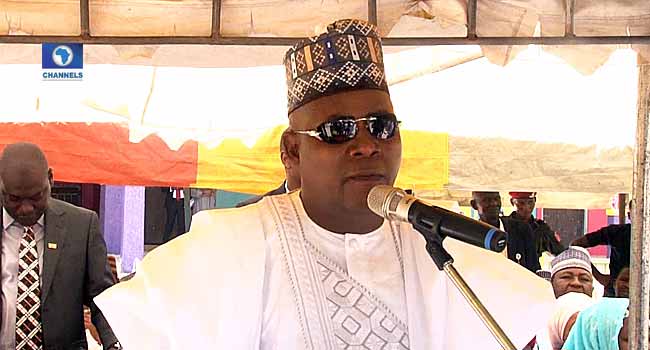 The Borno State Government has said that underage marriage of female children has now become a punishable crime in the state and that any parent found guilty will be prosecuted.

The state governor, Mr Kashim Shettima gave the warning on Wednesday while addressing parents whose children are beneficiaries of the free basic education introduced by his government.

The government also presented parents with incentives which included food items and wears, as part of efforts to encourage them to send their female children to school rather than selling them off to marriage.

Shettima said: “Allow them to finish secondary school; irrespective of all the assistance and hospitality we offer you, whoever marries out his 12-year-old daughter would be prosecuted.

“We as parents must help them acquire western and religious education,” the governor stated.

Prior to the free education initiative, many of the Fulani parents were opposed to western education. 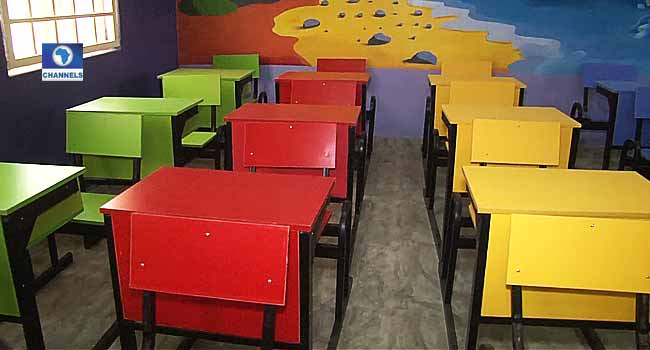 However, they have now been made to understand and accept the benefits of education for their (female) children.

Nearly 600 Fulani children are now to benefit from the free education programme. 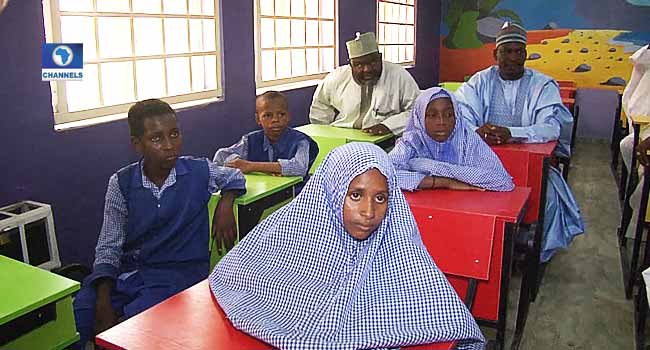 Some parents who spoke to Channels Television expressed gratitude to the governor for the initiative.

One of the parents, Amina Maina, said: “We are from Gudumbali, it’s because of the crisis that we came here, and we didn’t return. Since our children have now been enrolled in school we are not going anywhere until they finish school if God spares our life.”

Also according to the government, homes will also be provided for the displaced Fulanis.

100 houses are expected to be set aside for them from the homes built by Nigerian businessman Aliko Dangote for victims of insurgency in the state. 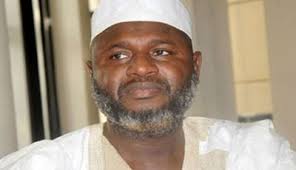 In an exclusive interview with Channels Television, Senator Ahmed Yerima of Zamfara state defended his position on the controversial topic #ChildNotBride, an issue he said “is all about the definition of full age”.

The removal of Section 29 (4b) of theNigerian constitution as intended by the National Assembly will leave citizens with Section 29 (4a) alone. This is against Islamic law which states that “any married woman is of full age,” he said, adding that “some don’t know that the provision is available in both the 1999 and 1979 constitutions”.

The Senator who argued his case on the floor of the Senate using Islamic laws as defense, said his position on “any woman who is married shall be deemed full of age” “is provided for in the Quran.”

He cited Chapter four of the Quran to back his argument.

He stated that the “the issue of full age was given based on the maturity, that is, age of puberty of a girl,” adding that he recently discovered that the age of puberty as defined by European laws is given as between 12 and 14.

While arguing his case, he stated that puberty is define by the start of a girl’s menstrual cycle, which may commence at age 9 and “when the breasts are fully mature”.

The Child Right’s Act which stipulates the age of maturity as 18 “is not constitutional,” he said, insisting that “once a girl reaches the age of puberty” she is assumed to be matured and determined by her parents and ready for marriage.

On the number of his wives who are under the age of 21, he said that “so long as I don’t do any action that is against Islamic law, I am covered by the Nigerian constitution”. 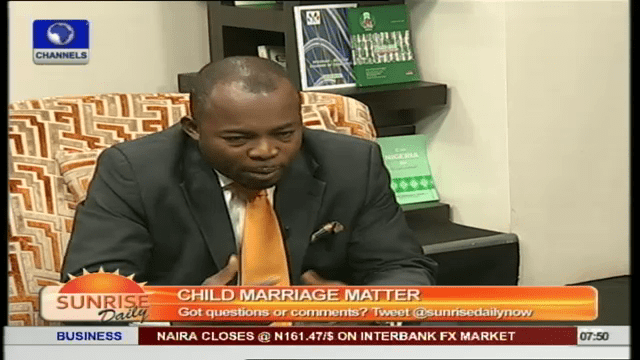 A public affairs analyst, Michael Adeleye, has described Senator Ahmed Yerima’s arguments about the legality of marrying underage girls, as an attempt to ‘defend the undefendable’.

Speaking on Sunrise Daily, he said “When I listened to Senator Yerima, yesterday, I began to ask questions. Are we living in a society where some laws seem to supercede or reign supreme over the law of the land?”

In his opinion, if a law comes out of a religion and tries to reign supreme over the laws of the land, then I think it’s questionable.

He faulted Senator’s Yerima’s claim that the parents of a girl are the ones to ascertain her maturity. “A parent cannot ultimately decide, but they can give consent”.

Although the particular law in question, Section 29(4b) of the Nigerian constitution, addresses the issue of citizenship, Mr Adeleye argues that a 9, 10 or even 13 year old female cannot be qualified as a ‘woman’ owing to the fact that such an individual does not have the mental capacity to make important decisions.

“Do you think they’re going to be able to make a decision on what’s going to happen to their lives?

He called for a review of the Marriage Act which has not been adopted in all 36 states of the federation, while making reference to the many conventions on the standard age of marriage to which Nigeria is a signatory. 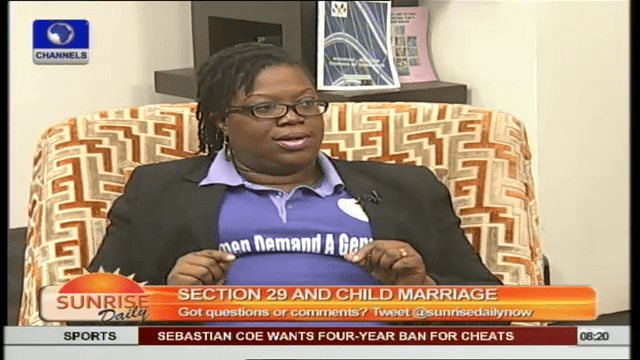 The National Coordinator, Gender and Constitution Network, Dr. Abiola Akiyode Afolabi has said that Nigeria’s signature to international conventions such as UN Convention on Rights of Child, Protocol on the Rights of Women in Africa, African Charter, African Protocol on the Rights and Welfare of a Child, demands that it conforms to the global standard which stipulates ‘the majority age of a child as 18.’


While speaking on Channels Television’s breakfast programme, Sunrise Daily, the female rights activist, who was present at the Senate meeting when lawmakers voted to maintain the now controversial Section 24(4)(b) of the 1999 constitution said “the argument of the Senator (Sani Yerima) is actually unnecessary.”

The clause in question states that any woman who is married shall be deemed full of age is in reference to citizenship renunciation and not marriage, as widely misconstrued.

“It is important for us to put the facts straight. Section 29 is dealing with citizenship issue and renunciation of citizenship,” she said.

She added that “the constitution is not supposed to be addressing the issue of marriage” as stated by its exclusive list which does not allow the National Assembly to make laws related to customary and Islamic marriage.”

However, “one of the reasons why we are arguing for the deletion is also for us to ensure that we don’t have ambiguity in the constitution.”

“If Section 29(a) which says full age is 18 and above, why do you need another section determining a particular gender which can be called full aged.”

She disclosed that the culture of marrying off underage girls to men is not peculiar to Northern Nigeria as her organisation has cases of the same occurring in Lagos.

It will not suit us if we have a section in the constitution that can be misread in the manner in which Senator Sani Yerima argued.

She said that the #ChildNotBride fracas has promoted the need for Nigerians to be much more aware of what is happening in the constitution” as well as what the Senate votes for on behalf of the citizens.

Afolabi also raised the issue of inconsistencies prevalent in the different laws and regulations as regarding age of a majority.

“The immigration code has 16, under criminal code we have between 12 and 17 as the age of majority” also, the Age of Marriage Law, (1990) as drafted by the Senate stipulate the acceptable age for a citizen to marry as 18.

However, this remains a federal law applicable to the Federal Capital Territory. 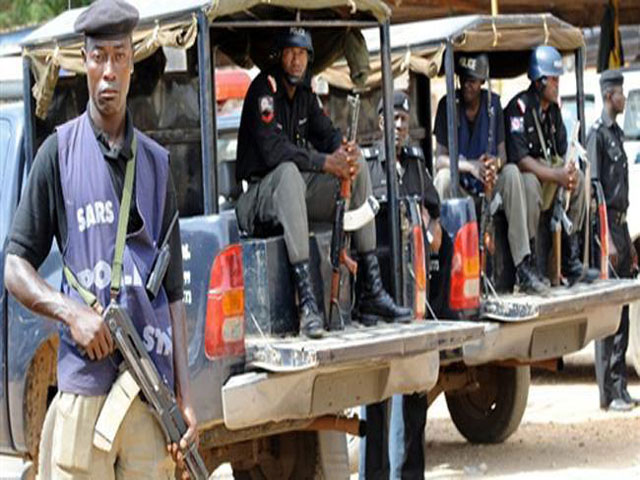 The Edo State Police Command has paraded 32 suspects, , for various offences including a pastor who defiled two young girls.

Parading the suspects before journalists, the Edo State Commissioner of Police, Folusho Adebanjo disclosed that among the 32 suspected criminals were four men who were paraded for defilement of underage girls.

One of them is a 47 year old alleged Deeper Life Pastor, Eze Fidelis, who was arrested for having sexual relations with two eleven year-old girls.

Mr Adebanjo, who paraded the suspects before journalists, disclosed that some of the suspects were arrested for robbing passengers of their belongings in what is popularly referred to as “One Chance”.

Two of the suspects, who confessed to their crimes, Stephen, Stanley and Kabiru were arrested for illegal possession of firearms and cultism.

Mr Adebanjo said his command is ready to ensure the maintenance of law and order in the state.
He appealed to residents of the State to continue to provide the police with information that will aid in apprehending criminals.