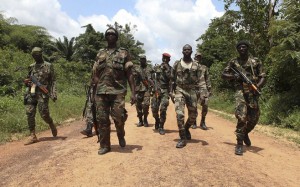 Cote d’Ivoire’s army took back control of a village on its southwestern border with Liberia on Friday after gunmen seized it in an attack that left 13 people dead, the country’s defense minister said.

Around 40 men attacked and looted the village of Fetai, located on the Cavally River separating Cote d’Ivoire Coast and Liberia, early on Thursday, Paul Koffi Koffi told journalists in the commercial capital Abidjan.

The Ivorian military launched a counter-attack early on Friday to drive them out.

“There was an ambush that killed three (soldiers)… Ten were killed among the civilian population. We’re carrying out clean-up operations in the forest and we’ve gone all the way to the Cavally River … The situation is under control,” he said.

Cote d’Ivoire, the world’s top cocoa producer, is recovering from a decade-long political crisis that culminated in a brief 2011 civil war after former President Laurent Gbagbo refused to accept his election defeat to Alassane Ouattara.

Gunmen from Liberia have staged several assaults on towns near the border in recent years that the government and United Nations have blamed on Liberian mercenaries and Gbagbo allies. Fetai was last attacked in February.

“This isn’t an attack like the other times … These are the youth from the region who are refugees. They are bandits,” Koffi Koffi said.