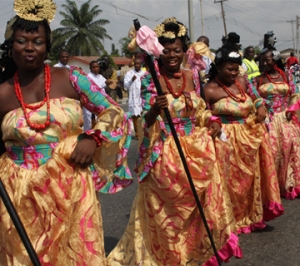 The Carnival Calabar often referred to as Africa’s biggest street party has become for Cross River State and its people, an ideal tool for tourism and ultimately Socio-economic development.

Ten years after it was introduced into the state by the former governor, Donald Duke, the private sector has now taken its full ownership for onward sustainability.

According to the state’s Deputy Governor, Efiok Cobham, while unveiling the 2014 Carnival theme which is ‘’Celebration Time’’ at the Millennium’s Park in Calabar the Cross River State capital, ownership by the private sector would open more window of opportunities for all sectors of the economy.

He also used the occasion to flag off the first dry run ahead of the main event scheduled for December.

The unveiling was followed by three mock rehearsals on different occasions along a 12km route to get the floats ready and in shape for the mega show.

According to tourists who frequent the city at this period, the Carnival Calabar is always a time they look forward to for originality and content which is usually displayed by five competitive bands; The Bayside Band (Blue), Passion Four (Green), Seagulls Band (Red), Master Blasta (Orange) and Freedom Band (Yellow).

The bands are expected to work hard to interpret the theme of the carnival come December 27, 2014, through their dance, float, and costumes as it affects the people of the state.

Marking its 10th year anniversary and the last carnival to be witnessed by the present administration while in office, the State Government has promised that the 2014 Carnival Calabar would leave participants and viewers across the world with many surprises.