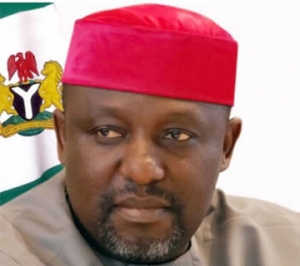 The Imo State Governor, Rochas Okorocha has presented the sum of 141.2 billion naira to the Imo State House of Assembly as the total budget for the 2015 fiscal year.

He said the policy thrust of the 2015 budget is derived from the rescue mission agenda of the his administration which anchored on a 4 year development plan that derived its bearing from the vision of his administration which are belief in God, free education, massive infrastructural development and increased agricultural production to ensure food sufficiency and food security.

The governor added that the 2015 budget will mainly focus on delivery of social services to the people of Imo State.

Governor Okorocha said the expected revenue projections for 2015 is 119.7 billion naira for recurrent items and capital receipts of 21.5 billion naira.

Senators Donate 50 Percent Of Salaries To Fight Against Covid-19