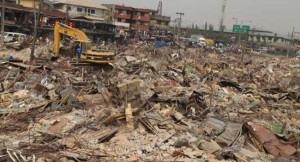 The Lagos State government has come out boldly to defend its action in the demolition of Owonifari market in Oshodi, insisting that the action was taken in the overall interest of public good, safety and security.

The state government made its position known at a joint press briefing addressed by the state’s Ministries of Information and Strategy, The Environment, Physical Planning and Urban Development, Local Government and Chieftaincy Affairs, and the Office of Civic Engagement.

The Commissioner for Information and Strategy, Mr Steve Ayorinde, said that there was no illegality in the demolition as the traders were adequately notified before the exercise took place as required by law.

He explained further that government engaged with the leadership of the market severally before carrying out the demolition exercise.

In addition to this, the State Government said it has constructed an alternative market stall for the traders which can conveniently accommodate over 600 shops and hundreds of key clamps.

They agreed to subsidize payment by giving shops at the new market at a monthly give away price of 5,000 Naira.

Rep Threatens To Resign Over Security Situation In North-East