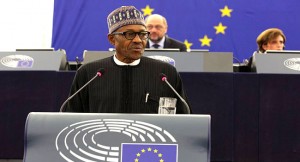 The President of Nigeria, Muhammadu Buhari, on Wednesday told the European Union that his administration was doing its utmost best to protect the fundamental human rights of persons in the ongoing counter-terrorism operations against Boko Haram insurgents.

The President gave the assurance on Wednesday while addressing a special session of the parliament in Strasbourg, France.

President Buhari said that his government shared the European Union’s commitment to peace and security, respect for human rights, democracy and good governance as well as equality and tolerance as ways of developing prosperous and strong societies.

On our part, we have updated our Rules Of Engagement in fighting terrorism and pay very close attention during operations to the treatment of captured terrorists, civilians caught up in the conflict and in general, safeguarding property.

“Our aim is to use minimum force necessary in our fight against terrorists,” the President told members of the parliament and the European Union commission.

He said that Nigeria was yet to sign the agreement because pertinent technical issues raised by the Federal Government have not been satisfactorily addressed.

“Giving due consideration to the mismatch of the two regions (Europe-ECOWAS) in terms of technology and manufacturing experience, the Manufacturers Association of Nigeria and Associated Trade Unions raised concerns over the negative impact of the agreement on Nigeria’s industrialisation programme.

“Nigeria is working towards addressing her own side of the issues and I therefore, urge our European Union partners to also address our own concerns to allow for an economic partnership agreement that is mutually beneficial and can contribute to the prosperity of our people, in the context of our shared values and interest at promoting cordial bilateral trade relations,” he said.

The President also sought greater support from the European Union for Nigeria’s efforts to curb the theft of its crude oil and corruption in its oil and gas sector.

“Nigeria is facing the challenges of oil-theft and illegal bunkering in the Niger delta as well as recovery of illicit funds. In this regard, Nigeria solicits the cooperation of the European Parliament to support the efforts aimed at stemming these vices.

“Our attempt to restore security, curb corruption and fight crime will result not only in improving social stability in Nigeria but will re-open the doors for full economic relations with Europe and the rest of the world.

“Those who wish to invest in our country have immense opportunities and we intend to guarantee the security of people and investments brought to Nigeria,” he said.

President Buhari also assured the parliament that Nigeria would collaborate with the European Union to address illegal migration to Europe.

“Our government is making concerted efforts to address the push-factor that propel migration, especially from Nigeria, as both destination and transit country.

“In this year’s budget, the government has provided for over 500,000 graduate employment in the teaching profession alone. We are equally collaborating with the states and local governments to strengthen skills acquisition centres in order to train the teeming youth in various vocational skills, so that they can be self-employed and eventually become employers of labour,” he stated.

The Nigerian leader further said that his government was also making efforts to diversify the economy, giving impetus to agriculture and solid minerals exploitation, to create wealth and employments.

“Nigeria welcomes the outcome of the Valletta EU-Africa summit on migration, including the launching of 1.8 billion Euros Emergency Trust Fund to address the root causes of migration from Africa to Europe.

“Nigeria will work with the countries of the Sahel and Central Africa to submit to the board of the Emergency Trust Fund, our identified projects for funding in due course.

“The Common Agenda on Migration and Mobility (CAMM), which Nigeria was the first African country to sign on March 12, 2015, is a demonstration of the positive spirit of our cooperation with the European Union in the field of migration and development,” President Buhari further told the gathering.

He also proposed a reciprocal visa waivers for holders of Nigerian diplomatic and official passports attending official meetings and conferences in Europe.

Increasing Cases Of COVID-19 May Overwhelm Our System – Health Minister

SGF: We Have Identified Three Claims Of Local COVID-19 Cure For Further Investigation