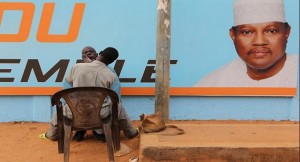 Niger’s opposition coalition said on Tuesday its candidate, Hama Amadou, would not contest a run-off election on March 20, increasing the chances that President Mahamadou Issoufou will win a second term.

Amadou has been in prison since November on charges relating to baby-trafficking. He says he is innocent and a victim of political repression. The government denies wrongdoing and says it follows the law.

“The Coalition for an Alternative has decided to suspend its participation in the electoral process and asks its representatives to withdraw from the electoral commission,” it said in a statement.

The coalition denounced Amadou’s detention and justified its decision to withdraw by saying the constitutional court had not followed procedure when it announced definitive first-round results on Tuesday and had also not proven its independence.

The coalition, which unites about 20 political parties including Amadou’s MODEN, also asked its deputies to cease activities at the National Assembly.

Issoufou fell just short of outright victory in the first round on Feb. 21 and was expected to win the run-off as several smaller parties have said they will support him.

He campaigned on a promise to clamp down on Islamist militants and revive the economy in Niger, one of the world’s poorest countries.

The Islamist militant group Boko Haram, which is based in Nigeria, has staged a series of cross-border attacks in Niger’s southeastern Diffa region, forcing the government to impose a state of emergency there.

Niger produces uranium and oil but is ranked last in the United Nations’ Human Development Index and has one of the world’s highest fertility rates.