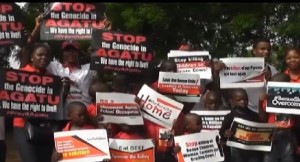 The attacks on nine council areas of Benue State by herdsmen have continued to attract reactions from the Agatu community.

Civil rights activists and survivors of the attack have gone on a protest in Makurdi, the Benue State capital to air their grievances.

They are calling for the intervention of the state and federal authorities in the crisis.

The children of the community also joined their parents to protest against the violence which had left hundreds of people dead and others displaced.

One of the protesters accused the Benue State Police Command of bias, an allegation the Commissioner of Police denied.

“We invited the young man to this office and I told him (that) from the security information we had at hand, he should postpone this disposition until next week because hoodlums are going to catch down on the situation,” the Police Commissioner said.

As the residents of Agatu community drew attention to the situation to prevent re-occurrence, they also requested for the deployment of special security forces to maintain peace in Benue State in Nigeria’s central region.