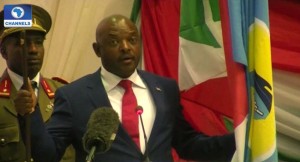 The President of Burundi, Pierre Nkurunziza, has condemned the killing of a senior army officer shot along with his wife and bodyguard in an attack that also wounded their child.

The attack is the latest in an expanding wave of violence in the central African nation that heightened after Nkurunziza declared his interest in a third term in office.

A spokesman for the Army, Gaspard Baratuza, told reporters that Brigadier General Athanase Kararuza, who was a military adviser in the office of the vice president, was dropping his child off at a school in the capital Bujumbura on Monday when his car was attacked by rocket and gun fire.

Kararuza had previously worked as a deputy commander of an international peace force in the Central African Republic (CAR).

“He energetically fought against the coup plotters last year and exceptionally contributed in strengthening peace and security during and after elections,” Nkurunziza said in a statement late on Monday.

“We humbly pray that, with the help of God, perpetrators of the shameful acts are arrested and quickly punished according to the law.”

Reuters reports that tit-for-tat attacks between Nkurunziza’s security forces and his opponents have escalated since April 2015 when he announced a disputed bid for a third term as president. He won re-election in July.

The United Nations says more than 400 people have been killed and more than 250,000 have fled the country.

Burundi and neighbouring Rwanda, which both have an ethnic Hutu majority and Tutsi minority, have been torn apart by ethnic conflict in the past. Experts fear the recent violence during the political crisis in Burundi may reopen old ethnic wounds and risk causing civil war.