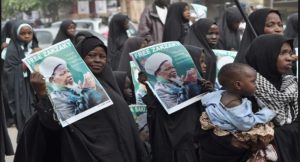 Members of the Islamic Movement in Nigeria have taken their protest to Kano State in the northwest region of the country.

Once again, the Shiites are asking for the release of their leader, Sheikh Ibrahim Zakzaky, after the alleged massacre of their members in Zaria.

Including women and children, members of the group carried posters of their leader while chanting various anti-government slogans.

One of the protesters, Fatima Muhammad, said that their leader has been confirmed sick and needed immediate medical attention, noting that his health was deteriorating.

The group stated that there would be no going back and that they would continue with the protest until their demands were met.

They maintained that Zakzaky and the entire members of the movement have not committed any offence.

The Shiites added that they would also continue to follow due process in ensuring the release of their leader whom they said has lost his sense of sight.

El-Zakzaky was arrested in 2015 following a clash between some Army personnel and members of the religious group in Zaria, Kaduna State.