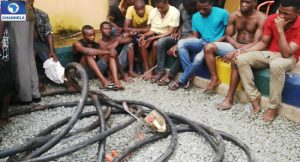 Police have arrested some persons suspected to have vandalised transformers of the Enugu Electricity Distribution Company Sub-Station in Abia State.

According to the command, intensified anti-crime campaign with renewed vigour aimed to ridding the state of criminals led to the arrest of the suspected criminals.

About 20 suspects were paraded at the Police Headquarters in Bende Road, Umuahia.

Part of the figure were other suspects involved in various crime – armed robbery, fraud, faking and forging of vehicle license, proof of ownership and other sensitive government documents amongst others.

Also among them were four suspected cultist of Covenant Polytechnic, Aba, who are all final year students pursuing a National Diploma.

The police said that all the suspects have confessed to the crime.

Items recovered from them include, one locally made double barrel shortgun, two live cartridges, one machete, two rolls of heavy armoured cables worth thousands of Naira and two jacks as well as some substance suspected to be cocaine.

One of the suspects, Prince Okoroafor, an indigene of Amaekpu ,Ohafia and a car washer at Aba, claimed that it was his first attempt at vandalising government’s installation.

He also said that he was lured into the business by a friend – an indigene of Omoba where the heavy armoured cables were stolen – but was unaware that his friend was notorious for vandalising government’s infrastructure.

”My friend called me to escort him to his village that he has a business for us but I did not know that it involved vandalising, as soon as I got close to the armoured cable with the okada man, the villagers quickly surrounded us and I looked around but my friend was gone,” he told reporters.

His friend is currently on the police list as a wanted criminal and all efforts are being put in place to track him down and arrest him for the crime.

The Police Commissioner in the State, Adeleye Oyebade, said that the strategies put in place by his management team in combating crime yielded the desired results.

He told reporters that the Area Commanders, Divisional Police Officers had been mandated to explore intelligence-led policing, community policing and involvement of Eminent People’s Forum in tackling crime.

These efforts, according to the Commissioner of Police, require the involvement of citizens and would assist to chase away the criminals from the state.

He warned hoodlums to stay clear, as all the exit and entry points to the state were secure, with officers strategically positioned to checkmate any criminal activity.