Private Sector Should Partner With Govt. On Economic Development- Saraki

In moving the Nigerian economy forward and alleviating the problems facing the nation, the Senate President, Bukola Saraki, has urged the private sector to partner with the government.

According to him, this is why one of the first legislative initiatives, was to “review all the laws that made it difficult for people to do business in our country and also those that frustrated investors willing to come into our country”.

He said this while addressing guests at the first National Chevening Alumni
Leadership Summit which kicked off at the Intercontinental Hotel, Lagos, on November 18, 2016.

Calling on the Chevening alumni to take action, Mr Saraki said “we must create a system that enables the best minds to work effectively for the good of the country.

Meanwhile, the Chairman Of Channels Television, Mr John Momoh, also addressing the Nigerian situation at the event, said Nigeria is replete with some inept and corrupt leadership.

“The gap in Nigeria is indisputable, Nigeria is replete with some inept and corrupt leadership which has been exacerbated by ethnic and sectional and sometimes religious biases, but! this doesn’t imply that we have never had good leaders, he said emphatically.

“Infact we have had many good leaders and some of which are present in this room today.

“A day like this is very important as it gives us an opportunity to meet with Nigeria’s great men and women.

“This is a time for us to reconnect, to swap success stories, a happy time to spend together and even much more a time to relish the experiences and values we all share.

“This morning, we will be able to brainstorm together on a matter of national importance: the economy.

Touching on issues such as corruption, he opined that “corruption has had far-reaching repercussions, including impairing the armed forces ability to combat the Boko Haram insurgency in the North east.

He also spoke of pipeline vandalism and how activities of the Niger Delta Militants have affected the nation which once solely depended on oil.

In line with the theme of the occasion, the Channels Chairman re-iterated the roles of the Chevening alumni, in bridging the leadership gap and ultimately improving the state of the nation.

“We must live beyond our capabilities, let’s dream big, develop leadership skills, and strive to sour beyond our own personal gifts.

“Let’s not wait for things to happen –  Instead, let us make things happen – Let us, as Chevening scholars initiate change.

“We must also help people to discover themselves – We should we can have our heads above the clouds But ensure that we have our feet firmly on the ground, sou that we do not alienate the people.

This according to him has been one of the short-comings of many leaders across the world.

“We must be able to lead ahead of our contemporaries – We must live deeper than our calamities” Mr Momoh challenged the alumni. 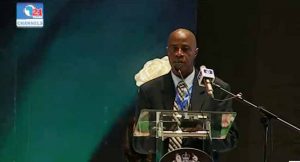 On a lighter note, the President of the Chevening Alumni Association of Nigeria (CAAN), Thomas Odemwingi, in his address of welcome, apologized on behalf of the executive, that since the inauguration of the association, it has only had few activities.

He however stated that the British High Commission, could attest to the fact that they have been involved in activities such as conducting interviews for schorlarships, for chevening programs, as well as send forth parties, among others.

He explained that the group was launched in August 2011, as a charity, while stating that the aim of the programme was to “plan what we are going to do at the different levels of governance and in the various geo-political zones”.

“For those of you that are being involved in one assignment or the other, I would like you to be very committed to this, so that at the end of the day, we would pass on the baton to a new generation”, Mr Odemwingi charged the guests”.

He stated that one of the achievements of the association was that it had “successfully made a progamme proposal for Chevening alumni programme funds.

The association president, went ahead to commend a number of people for their immense contributions to the association.

Organisers of the event restated that the Chevening / U.K government global scholarship programme, is aimed at individuals with strong academic and leadership potentials, to network extensively and study for a fully funded masters programme in the United Kingdom.

In his address, the British High Commissioner, Paul Ark wright, described the occasion as an “exciting new chapter in the story of this wonderful U.K/ Nigeria Partnership”.

Recalling the “spirits of the chevening awards” Mr Wright said:

“It is a phenomenal opportunity and the competition is fierce, none more so than here in Nigeria, where Chevening attracted more applicants than many other countries worldwide, last year.

Highlighting some of the problems faced by Nigerians, such as the economic recession and attempts to create a more diversified and inclusive government, he sxpressed that:

“The U.K is firmly committed to supporting these efforts”.

He also stated that part of the desires of the Chevening programme, is to empower Nigerians such that the problems being faced in the country, are not only solved by external forces but by Nigerians themselves, having acquired the necessary Knowledge and skills.

Mr Arkwright expressed appreciation towards guests which comprised alumni, industry experts among others.