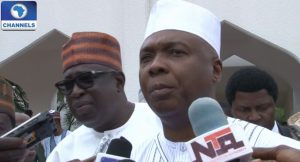 The Senate President, Dr Bukola Saraki, says the National Assembly will ensure timely passage of the 2017 budget once they receive the document.

He made the promise in a chat with journalists after a one hour closed-door meeting with President Buhari.

The 2016 budget presented in December 2015 was enmeshed in controversies before it was eventually signed into law by President Buhari five months after.

Initially, there were reports that the document had gone missing and later there were allegations of budget padding levelled against some lawmakers and public officers.

Dr Saraki gave the assurance that the National Assembly was ready to ensure that this delay does not happen again to achieve a speedy passage of the 2017 appropriation bill.

Nigeria’s President, Muhammadu Buhari, will present the 2017 appropriation bill to the National Assembly in the coming week.

The Minister of Budget and National Planning, Senator Udo Udoma, announced the plan after the Federal Executive Council meeting.

He said the exact date and time for the budget presentation would be determined by the National Assembly.

According to him, the 2017 fiscal document, of which he gave no details, has been well prepared to avoid the pitfalls that characterised the 2016 budget.

“The document that we are presenting to the National assembly is a carefully prepared on,” Senator Udoma said.

The Federal Executive Council meeting presided over by President Buhari lasted over five hours and Channels Television’s correspondent, Omelogo Nnadi, said it was expected to take such time, as the topic under trashing was the 2017 national budget.

Also at the press conference was the Minister of Power, Works and Housing, Mr Babatunde Fashola, who announced the council’s approval for the construction of some hydro dams in parts of some states to boost electricity supply which had dropped significantly in recent months.