Magu’s Confirmation: Conspiracy Between DSS And Senate Is Appalling – CACOL 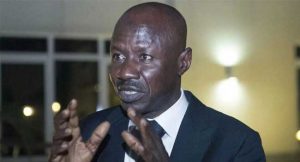 The Coalition Against Corrupt Leaders, CACOL, has described the Senate’s non-conformation of Mr. Ibrahim Magu as the substantive EFCC Chairman, based on what was described as a ‘security report’ from the Department of State Services (DSS) as appalling and ridiculous.

CACOL reiterated its position on the lingering debacle in a statement by its Executive Chairman, Debo Adeniran on Saturday.

Media reports have listed the ‘infringements’ purportedly committed by the EFCC boss to include; Magu’s arrest, detention and suspension by the Police, that the sum of N40m was paid for renting an apartment, which costs N20m per annum; possession of official EFCC documents in his private residence during the period Farida Waziri was the EFCC boss amongst others.

The group, however, believes that there is more to this than meets the eye.

The statement reads: “Without prejudice to the veracity or otherwise of these “infringements”, we insist that what is really at the background of the debacle is the reality that the Senate knows Magu’s salts and the fact that he is worth it!

“The Senate as presently constituted from the leadership to the rank and file members, is peopled by deeply corrupt elements that deserve no space in such a quintessential Arm of government in a democracy that it is fledging.

“We find it utterly ridiculous that it is at this point that the DSS is just coming up with so-called infringements after about a year of Magu superintending over an Agency of government that is so central to the anti-corruption drive of our country.

“Clearly, there is the auspicious need for Nigerians to really take back their country from a political class that is hell-bent on imposing and spreading the virus called corruption in the polity. Their effrontery in fighting back given the ‘anti-corruption mode of the people’ now knows no limits.

“Our take is that, we, collectively and urgently need to rescue our country; regain our respect within the comity nations to a large extent. A fundamental thing we must realize is that the fight against corruption is actually about sustaining a national consensus that will focus on our strong desire to sanitize our country.

“The point is that, at some time as people, we forget our goals and focus on frivolities at the expense whatever gains of what we consciously describe as ‘anti-corruption mode of the people’ that has recently activated in the country.

“Let’s get serious, we must recognize the inevitable need to own the anti-corruption drive and raising the bars regardless of the occupiers of power at any point, we cannot afford let down the guard. The consequences of corruption need not be over-emphasized, for our socio-economic reality says it all.

The DSS and Senate’s current connivance over Magu betrays conscious mischief and conspiracy if the last time the DSS carried out a ‘sting operation on corrupt judges and the fire and brimstones that came from the Senate were anything to take serious at all.

“It is important to state that we understand perfectly the imperatives of holding ‘principle of separation of powers’ in constitutional democracy as sacred! But won’t we be engaging in national tomfoolery if we pretend not understand what is at stake on this issue?

“We must always be circumspective and objective when some of these ‘conflicts’ within a ruling class that has overtime established themselves as incurably greedy props up. What actually, constitute our priorities if we indeed profess to anti-corruption and the effort to rid our country of the virus of corruption that is so deeply seated in our system as whole?

“The truth is, if mischief was not involved, why would the DSS submit the so-called damning report to the Senate, rather than begin where they should have begun? For crying out loud, the head of the DSS sits on the Board of the Commission of EFCC as constitutionally required by the Act that established the agency i.e. EFCC Establishment Act 2004!

“Again, why would such a sensitive report on someone who has occupied such a sensitive position for about one year be delayed till this time? What sort of security apparatus will so wickedly wait till now while our country was at such ‘grievous’ risk before releasing these apparently manufactured allegations against Magu?

“If the allegations were true, it only tells a lot about the kind of people who the country has put its security in charge of. We need serious introspection on this disgraceful attitude which we consider as punishable under the code of conduct of intelligence and security agencies and personnel.

“Magu, who chairs the board and other members were obviously open to scrutiny and must have been subjected to same logically given the sensitivity of their designated roles as security and intelligence agents.

“The open rivalry amongst the security agencies has once again reared its ugly and embarrassing head in the present debacle which we need to take serious note of. It’s truism that even the DSS is required to report to a higher hierarchy in our security system, making it compulsory for the Service to report to the office of the National Security Adviser.

“The Service and all other security agencies must not be seen to be partakers in the self-serving ways of the political class.

1 By the Act that established the EFCC, the board of the commission consists of the following members,

(1)      Be the Chief Executive and Accounting officers of the Commission

(2)   Be a serving or retired member of any government security or law enforcement agency not below the rank of Assistance Commissioner of police or equivalent, and

(B)       The Governor of the Central Bank or his representative, and

(C)       A representative each of the following federal Ministries

(E) The Director General of-

(2) The Department of State Security Services or his representative,

(G) The director general, Securities and Exchange Commission or his representative,

(H) The Managing Director, Nigeria-Deposit Insurance Corporation or his representative

(I) The Commissioner for Insurance or his representative,

(J) The Postmaster-General of the Nigerian Postal services or his representative,

(K)  The Chairman, Nigerian Communication Commission or his representative

(L) The Comptroller –General, Nigerian Customs Services or his representative,

(M) The Comptroller-General Nigeria, Immigration Services or his representative

(N) A inspector General of Police or his representative,

(O) Four eminent Nigerians with cognate experience in any of the following that is finance, banking and accounting, and

“The above should be instructive enough to expose the present mischief for the undiscerning to see and for the need for us all to remain vigilant as corruption fight backs.

“We once again, call for the resignation of Mr. Bukola Saraki as the Senate President given the plethora of corruption cases he is indicted for. He lacks the moral grounds and integrity to occupy such a national space which should be sacredly reserved for leaders who are men of honour.

“We hasten to remind us not to quickly forget the melodramatics that has been orchestrated by the present Senate; these includes how they mobilized themselves in embarrassingly large numbers to queue behind an individual that till the moment has not proven his innocence at the Code of Conduct Tribunal over the corruption charges hanging around his neck.

“The strange term ‘budget-padding’ also came into our national lexicon within the life span of the present NASS so far with the manner the budget 2016 was handled.

“And it is the same Senate that have brazenly utilized different crooked means of causing confusion to achieve the bid to shield themselves from scrutiny while tactically escaping the jaws of justice. It is the same attitude that is responsible for the several attempts to strip the people of their fundamental human right to expression via their yet-to-be discarded idea to shut down the social media.

“Oppressors and corrupt elements are never comfortable with transparency, public accountability and probity and that is what is fundamental about this unnecessary ‘confusion’.

“We must collectively demand that the Senate fulfils its duty as dictated by the constitution. We must look beyond the parochial lens of the so-called friction said to be existing within the different arms of government.

“We do not need to pander to obviously corrupt ways of the ruling class to guarantee that independence of each arm of government is not abused and for checks and balances in governance not be jeopardized.

“It is about our country, we dare say that, it is much more beyond the antics of the present occupiers of the corridors of power including President Muhammadu Buhari, his party, the APC and others.

“Let us take back Nigeria now, it is our country!”

COVID-19 Cases: Lagos Has Not Reached Its Peak Yet – Abayomi