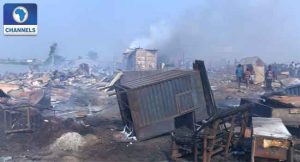 The Ogun state government says it is immediately commencing the process of restructuring the development at the Kara market to prevent incidents of fire outbreak which has become a yearly occurrence.

The measure, according to the Commissioner for Urban and Physical Planning, Mrs Ronke Sokefun, is pending the final relocation of occupants of the market to the proposed final place at Ogere area of the state.

She made the disclosure when she led other commissioners on an on-the-spot assessment of the damage done to the market by an inferno which broke out on Christmas Day.

“It is just because of the holidays, we have equipment on ground to commence work at once. If you look behind me you will see that the place has been red tapped. The red tape is to contain the incident site where the fire started from.

She also commiserated with the leadership of the market over the unfortunate incident.

Meanwhile occupants of Kara market have expressed their readiness to relocate to the new market being prepared by the state government.

“We do not know what caused the fire, we just saw the fire and we immediately contacted the Ogun state government and they responded. We are not happy about the incident at all. This is why the commissioners are here.

“We are waiting for the government because the government is currently doing something at Ogere. So, we are ready to go to the place anytime they say we should move, we are cooperating with the government, no problem at all.’’

The Commissioner for Environment in his own contribution, admonished residents of the state and especially markets to always take adequate precautions to forestall fire outbreak during the harmattan season.

“This time of the year of course is prone to fire outbreak. Basically people should be mindful of how they handle electrical appliances and those who deal with naked fire should control  how it is done because the season we are in fire thrives most,” he said.

No life was lost but property worth millions of Naira were destroyed by the inferno.

Are You Midwives Of Good Things For Nigeria? Lumumba Asks NASS