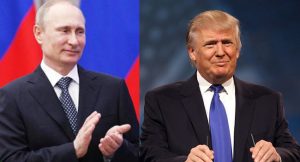 Russia has denied claims that its intelligence agencies have compromising materials about Donald Trump.

The President’s Spokesman, Dmitry Peskov, described the allegations as “pulp fiction” and a “clear attempt to damage relations”.

The unsubstantiated, claims his presidential campaign secretly communicated with Moscow.

They also say Russia has information about Trump, involving prostitutes; a report which he has denied.

Later on Wednesday, he had also stated via twitter that: “Russia has never tried to use leverage over me. I have nothing to do with Russia – No deals, no loans, Nothing!”.

Mr Trump is due to hold a news conference on Wednesday, nine days before he takes office, explaining his attempts to separate himself from his business commitments, and address concerns about conflicts of interest.