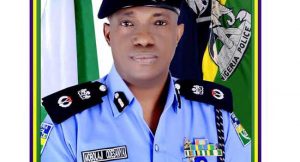 The Rivers State Police Commissioner, CP. Francis Mobolaji Odesanya, has died at the age of 56 years after a brief illness.

The late Commissioner of Police passed on at Sterling Hospital Ahmedabad-Gujarat in India.

He was enlisted into the Force on February 1, 1986 as a Cadet Assistant Superintendent of Police and rose through the rank.

“The Inspector General of Police and his management team, on behalf of the entire officers and men of the Nigeria Police Force wishes to commiserate with the Odesanya family of Ikenne town, Ogun State, the Government and good people of Ogun State on the demise and passage unto glory of their illustrious son, CP. Francis Mobolaji Odesanya.

“May his gentle soul rest in perfect peace and the good Lord grant his family and the Government and good people of Ogun State the fortitude to bear this irreparable loss,” the statement read.

Meanwhile, a condolence register has been opened at the reception of the Force Headquarters and Rivers State Police Command headquarters, Port Harcourt for the personnel of the Force and members of the public to append their condolence messages.

Burial arrangements will be announced after consultation with the family.