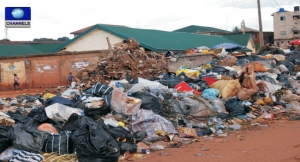 Residents of a small community named koko, in Delta state, are crying out as an incident of toxic waste dumping is said to have occurred in a pit near the waters of the community.

This is coming after the 1988 incident during which toxic waste was dumped in the area by an Italian company.

A veteran journalist from the area who blew the whistle, prompted Channels Television to visit the town.

Members of the Itsekiri Environmental and Human Rights Group, have accused one Ebenco Global Link Limited, based in Warri north local government area.

According to the spokesperson of the group, the seepage of toxic waste is harmful to residents in the area, plants and aquatic animals.

He also added that as the rain comes, surface and underground borehole water which is the major source of drinking water become polluted.

There are also allegations that samples of the waste being ferried into Koko by a private firm in Warri, have undergone series of scientific test which proves that the waste is highly toxic.

They have therefore called on the Federal Government to intervene in order to prevent a recurrence of the 1988 inicident.

Meanwhile efforts to reach the management of the company proved abortive.