Adeleke Died At The Prime Of His Political Career – Bisi Akande 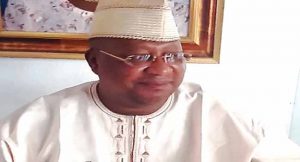 A former governor of Osun State and the first National Chairman of the All Progressives Congress (APC), Bisi Akande, has expressed his grief over the demise of Senator Isiaka Adeleke.

The former governor said Senator Adeleke died at the prime of his political career, adding that he was a young vibrant statesman of Osun State whose death would remain a shock to political elders for a very long time.

Akande, in his condolence message on Tuesday, said he felt a serious grief over Adeleke’s death.

“The cruel hands of death that kill younger people like Adeleke so suddenly are creating perpetual restless tremours for our generation and above. His death, at this age, is deeply painful.

“He was certainly born well and he lived well. We will continue to pray that God comforts his spouse, children, siblings, the people of Osun and his colleagues at the National Assembly,” he said.

The former APC National Chairman also prayed for the repose of the soul of the deceased and asked God to give his political associates the fortitude to bear the loss.