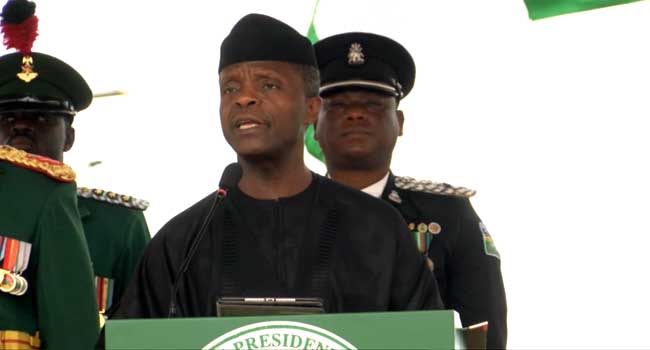 Vice President Yemi Osinbajo has tasked African leaders to tackle the rising surge of poverty among several others for the continent to achieve its 2063 agenda.

He gave this admonition in Owerri, the Imo state capital during the 48th Conference of the Commonwealth Parliamentary Association.

According to him, “Africa must take practical steps with urgent collaboration amongst African leaders to tackle threats of weak education and healthcare system, poverty, social safety, climate change and issues of resource-based revenues if Africa wants to achieve the Africa Agenda 2063.”

On the need for an enhanced collaboration, the VP added, “We need to collaborate and unite for Africa’s development” maintaining that “encouraging the understanding that an attack against democracy in any African state is an attack against democracy in every African state, building intra-continental infrastructure for easy movement, strong economic integration and recognition of full inherent potential of its human capital.”

In her remarks, Chairperson of CPA, Lindiwe Maseko, hinged on parliamentarians across Africa making sure that come up with legislation to tackle scourge of gender-based and domestic violence, shared poverty, unemployment, and inequality  and work together to find mechanism for conflict resolution, peacebuilding and development of African countries if the Africa Agenda 2063 is to be achieve.

On his part, the state’s Chief Executive, Governor Rochas Okorocha said, “The conference is apt and timely especially with the socio-economic issues affecting the development of African countries at the moment, he said he’s optimistic that in no distant time, Africa will sing a new song and join other continents of the world to celebrate economic greatness.”

The 48th conference of the Commonwealth Parliamentary Association Africa is an event that draws parliamentarians from across the 55 African countries.

However, this year’s event is being held in the Imo trade and investment centre state on the theme, “Africa Agenda 2063: Vision Masterplan.”

FG, States To Work Together On Forthcoming Economic Stability Plan