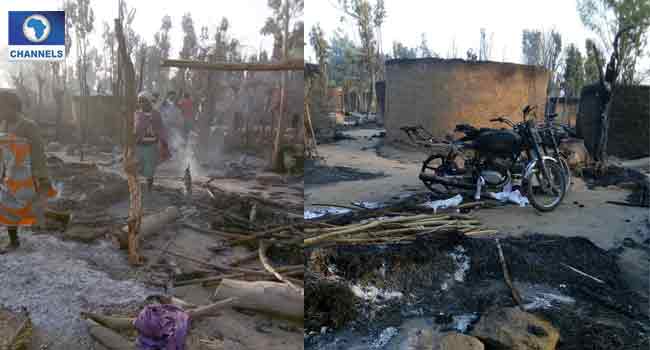 The Madagali Local Government Area of Adamawa state has witnessed a total of 35 attacks in 24 villages by Boko Haram in the last ten months resulting in the loss of 27 lives and over a hundred households destroyed.

This was disclosed by the Chairman of Madagali Local Government Area of Adamawa, Mohammed Yusuf, during a meeting of elders of organised by the council to find a way of assisting security agencies in the fight against the insurgency.

Worried by the incessant attacks on their communities by the remnants of Boko Haram elements who are taking advantage of their proximity to the Sambisa forest to constantly raid these communities leaving behind the destruction.

Therefore, elders of the affected communities are holding a crucial meeting aimed at examining the role of the community in the fight against Boko Haram in Madagali with a view to fashioning out ways of assisting the security agencies, particularly members of the hunters association and vigilante group of Nigeria in preventing further attacks on their defenseless communities.

The Deputy Speakers of the Adamawa State House of Assembly, Hon Emmanuel Tsamdu an indigene of Madagali speaks on the significance of the event.

He called on the Federal Government to deploy more troops to the area while the state government assist the vigilante group.

The highlight of the meeting is the raising of funds to assist members of the vigilante who have been involved in the fight against the insurgency with little or no support from the government.

The elders of Madagali are therefore using the meeting to draw the attention of Non-governmental organisations, the federal and state governments to the plight of the people living in the community.

#EndSARS: No Evidence Of Killings At Lekki Tollgate – Lai Mohammed

Ortom Asks Fulanis To Speak Out Against Foreign Invasion