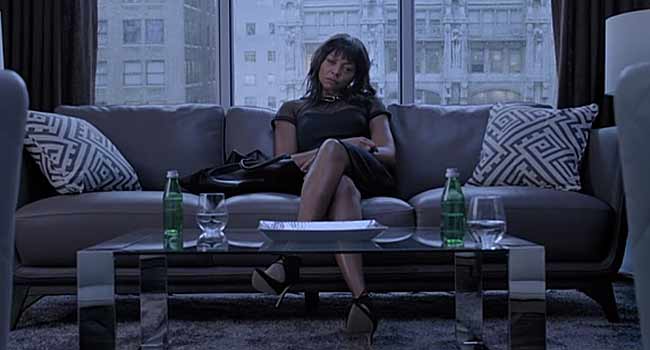 Since its premiere on March 30, the movie has grossed $43.5 million in the United States and Canada, and $2.8 million in other regions, reaching a worldwide total of $46.3 million.

At the weekend, it emerged as one of the top trends, with nearly 20k tweets, generating fresh conversation about the plot.

While the development has left some puzzled, many have continued to debate over who was to blame for the outcome.

Starring Taraji P. Henson and Lyriq Bent, Acrimony tells an intriguing story of a faithful black woman who feels enraged after being “betrayed” by her husband.

The story starts when she meets Robert in college. He seems to be the perfect handsome selfless dude until her mother’s funeral, when he exploits her grief to seduce her and then gets her to take $25,000 out of her inheritance to buy him a vintage car.

Shortly after, she finds out that he’d been sleeping with someone else.

However, she forgives him, and they get married eventually.

But things start to turn sour as they go broke and Robert continues to work on an invention which he believes will make them rich.

He spends years working on the invention and eventually trying to secure an appointment with Prescott – a company that has a lottery system for sourcing potential clients.

However, he comes off as lazy and in fact crazy – especially to Melinda’s sisters who in the first instance never really trusted his intentions.

In a sad turn of events, they get divorced but Robert’s invention finally succeeds.

He’s finally rich after striking a million dollar-deal and will be getting married to another woman, Diana, who will now reap the benefits (yacht, diamond ring, sky-view penthouse).

On their (Robert and his new wife Diana’s) honeymoon cruise, she appears and shoots Robert, makes the crew of the boat jump overboard and is about to shoot Diana, but Robert knocks her overboard.

As Diana goes for help, Melinda climbs back onto the boat, and attempts to hit Robert with an axe, but her leg gets caught in the anchor chain, pulling her off the boat, where she drowns.

It’s no doubt that Acrimony is indeed one that leaves most viewers in utter shock and in a state of introspection.

See Nigerians’ take on it below.

While some say it is all worth the hype, there are others who feel it may be overrated.

Every time I think I’m over how incredibly stupid Acrimony is, I remember yet another foolish scene and I’m mad all over again. Tufia!! What a waste! pic.twitter.com/PdJpKICOKl

If you watched Acrimony and you cry ,the problem you have is of a higher dimension.

But regardless, with the fresh buzz, it is almost certain that more people will want to see the movie.

Known especially for his Madea series, Tyler Perry has written and produced many films and stage plays.

‘I Wish I Knew How To Relate With Death’, Kunle Afolayan Mourns Alabi Yellow