Some members and delegates of the Peoples Democratic Party (PDP) in Osun State on Monday stormed the party secretariat to protest over the results of the just-concluded gubernatorial primary.

The protesting members at the party secretariat in Osogbo, the Osun state capital carried various placards and chanted slogans alleging that the primary results were manipulated to favour Senator Ademola Adeleke who was declared the winner.

PDP Chieftain, Funso Babarinde told Channels Television during the protest at the party secretariat that the delegates are protesting discrepancies in the primary result. 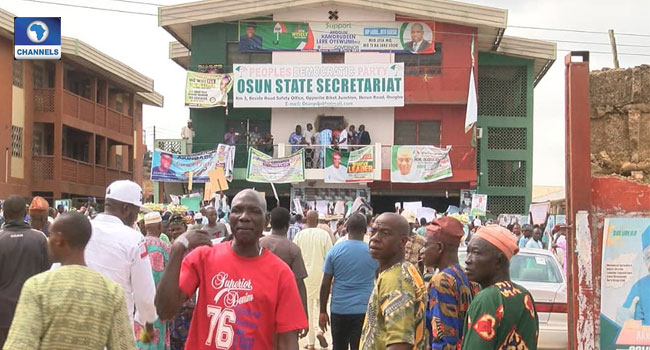 “We are here to protest the manipulation and the non-compliance with the voting rules and process that took place on Saturday under the supervision of the Governor of Bayelsa State Seriake Dickson.

“The delegates are saying that they voted Dr Akin Ogunbiyi to be the flagbearer of party. But through the process, his votes were manipulated and stolen. They asked for a recount, they recounted only his votes and didn’t count other votes. We are suspecting a lot of discrepancies about this primary,” he said.

They called on the National leadership of the party to order a recount of the votes cast and declare Akin Ogunbiyi as the rightful winner of the primary.

The lawmaker representing Osun West district in the National Assembly, Senator Adeleke won the governorship primary with a total of 1,569 votes to beat his closest rival Dr Akin Ogunbiyi who scored 1,562 votes.