All Is Set For Channels TV’s #OsunDebate 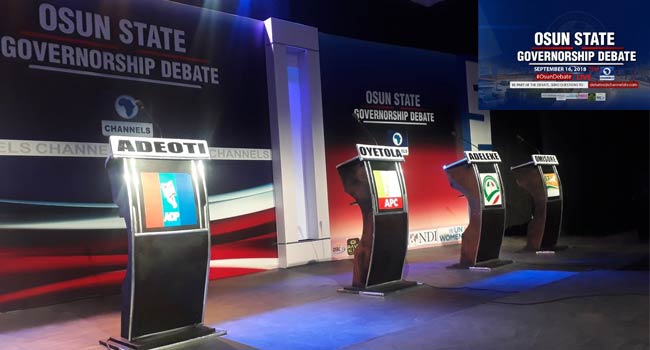 It’s few hours before the debate organised by Channels Television and its partners for the Osun State Governorship election.

The debate is set to hold by 7:00 pm at Osogbo, the Osun State capital, with five of the governorship aspirants answering questions and presenting the contents of their manifesto to the people of the state.

Some residents of Osun State during a brainstorming on the various issues germane to the people said the debate is important to hold aspirants responsible for their promises.

In the pre-debate event held on Saturday in Osogbo, the convener of transition monitoring group and Chair Ward C, Abiola Akiode-Afolabi stresses the importance of an election debate and need for those who want to govern to listen to the yearnings of the people.

“We realise people (politicians) make promises at campaign ground or during a debate, they don’t fulfill those promises.

“This process is to strengthen governance and ensure that when candidates make promises and eventually become governor of the state, we can hold them accountable to their promises,” Akiode-Afolabi said.

She added that promises made by the aspirants at the debate will be noted by the people and will be used against any of the aspirants that eventually wins the election if not fulfilled.

Below is a summary of the profile of each of the aspirants:

The ADP aspirant, Akinbade, is a former Secretary to the Osun State Government. He was also a former Commissioner and former Chairman of the PDP.

Akinbade contested the 2014 governorship election won by the incumbent, Governor Rauf Aregbesola under the banner of Labour Party (LP), after his inability to secure PDP’s ticket.

He returned to the PDP recently to vie for the party ticket but lost to Senator Ademola Adeleke, who polled the total votes of 1569, while Akinbade got 53 votes.

Adeoti recently resigned from the ruling APC and immediately crossed over to the ADP where he partook in the primary and emerged as the party’s candidate.

He also resigned as the Secretary to the Osun State Government (SSG).

Adeoti dumped the APC shortly after the APC primary. He claimed that the leadership of the party, at both the state and national levels, manipulated the primary to favour a preferred candidate.

Isiaka Gboyega Oyetola, is also a former Chief of Staff to Governor Of Osun State government under Rauf Aregbesola.

He emerged winner of the party’s first-ever direct primary by polling 127, 017 votes to beat Yusuff Lasun, Deputy Speaker of the House of representatives, who recorded 21, 975 votes.

Ademola Adeleke of the PDP is a serving Senator representing Osun-west senatorial district of Osun State.

He won a bye-election to occupy the position of his brother late brother, Senator Isiaka Adetunji Adeleke, who was previously the Senator representing Osun-west.

Senator Iyiola Omisore of the SDP is a former Deputy Governor of Osun State.

He polled 123,485 votes to win the party’s governorship ticket after beating his two other contenders Yemisi Oladeji, 1,802 votes; and  Munrudeen Atanda, 1,637 votes.

Osun residents anticipate listening to the aspirants tonight as they later go to the poll on September 22, 2018, to choose the candidate of their choice.

Edo Gov Election: Hearing Of Petitions Against Obaseki, Others Continues