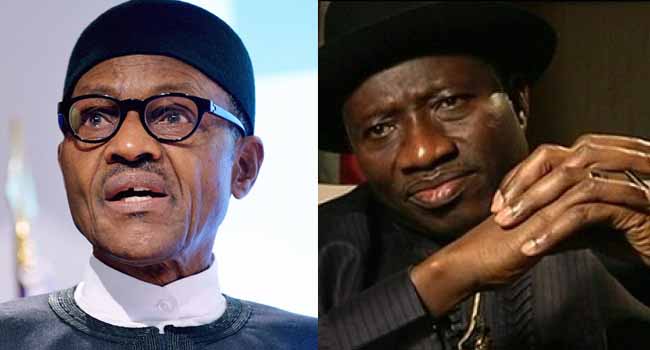 He praised the former president’s insistence that no Nigerian blood was worth his political ambition, describing him as a true patriot.

President Buhari stated this in a message delivered on his behalf by the Secretary to the Government of the Federation, Boss Mustapha at the presentation of the former president’s book titled ‘My Transition Hours’.

According to the President, elections should not be a declaration of war.

The event which took place in Abuja on Tuesday had in attendance the National Chairman of the All Progress Congress (APC) Adams Oshiomhole.

Also at the event is former Governor of Akwa Ibom State, Godswill Akpabio, who recently defected from the Peoples Democratic Party (PDP) to the APC.

Others in attendance are the Secretary to the Government of the Federation, Boss Mustapha who is representing President Muhammadu Buhari, former Heads of State, Yakubu Gowon and Abdulsalam Abubakar, former Vice President Namadi Sambo and Former President of Sierraleone, Ernest Bai Koroma.

Others are the Senate President, Bukola Saraki, Speaker of the House of Representatives, Yakubu Dogara, General TY Danjuma, Governors of Rivers, Bayelsa, Ebonyi, Cross River, Delta and Abia States, as well as the National Chairman of the PDP Uche Secondus.

‘No American Was Harmed In Iran’s Missile Attack’ – Trump

Tinubu Asks Nigerians To Focus On Nation-Building, Not Buhari’s Successor