We Need To Get The Local Governments Working Again – Jimi Agbaje 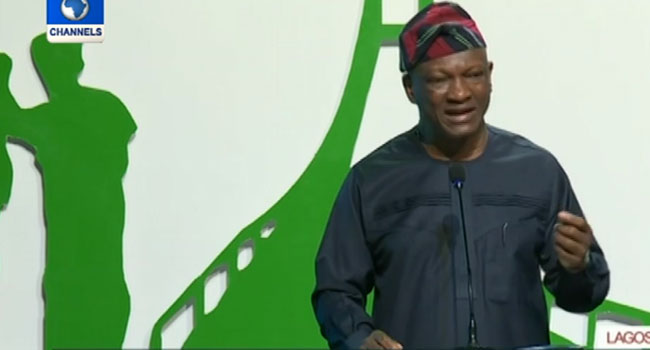 The Lagos gubernatorial candidate of the Peoples Democratic Party (PDP), Jimi Agbaje has said that the state’s local governments need to get working again.

Jimi Agbaje made this statement while responding to a question at The Platform’s Lagos Governorship Debate.

Agbaje in a reaction to questions about gridlocks in Lagos said that the key is to “get the local governments working again” adding that the grassroots play a great roll in making state function optimally.

The PDP gubernatorial candidate said that planning ahead is crucial if Lagos must overcome its problem with traffic jam.

Giving an example of the refinery coming up on the Lekki axis of the state, Agabje said if no forward thinking is put into play, then we may have another issue as experienced in the Apapa area.

He said, “There is no provision yet for what is going to happen to lift products from there, so if we are not careful, we are going to have another gridlock as we have in Apapa”.

Agbaje said town planning is very crucial in addressing the issue of gridlocks in Lagos.

“The idea is to have even development across Lagos state so that you are having less of movement from one end of Lagos to the other,” the pharmacist said.

He argued that the different parts of Lagos must be looked into as to make them self-containing.

Agaje surmised that “Lagos is still one of the two megacities in this world that does not have a rail system that is working” adding that “that is no longer acceptable”.

He also asserted that we must go into the idea of multi-layered roads because there is little to what we can do to expand our roads.