Those Watching My House Are Mischief Makers, Tinubu Reacts To Bullion Van Allegation

The National Leader of the All Progressives Congress (APC), Asiwaju Bola Ahmed Tinubu, has said that those who are monitoring his house and have been raising alarms over an alleged Bullion van sighted in his premises are nothing but mere mischief makers.

Tinubu made this statement after casting his vote in Lagos on Saturday, February 23.

“Who are those watching my house and looking at bullion vans, they must be mischief makers,” Tinubu said.

He said the claims that bullion vans coming out of his premises, does not in any way signify that his party is plotting to rig the elections as some have speculated.

The APC Chieftain said bullion vans are not ballot papers, adding that if they carry money, it is his legally earned funds and he can do with it as he wishes.

READ ALSO: ‘INEC Is Not Prepared’, Moghalu Says After Failure Of Card Reader 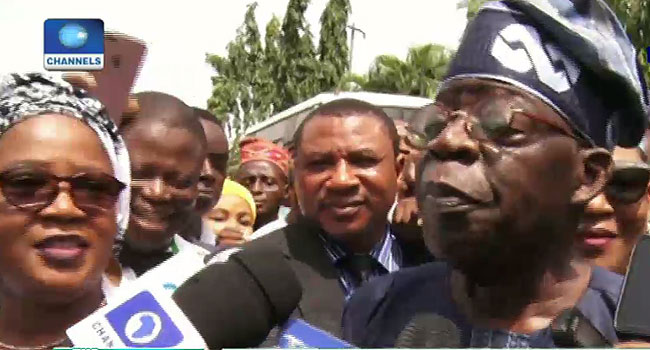 The former governor of Lagos state noted that he does not work for the government nor work for any agency of government so he has the right to his funds.

“If I don’t represent any agency of government and I have money to spend if I like I give it to the people for free of charge as long as it is not to buy votes”.

Speaking about the electoral process and the ongoing exercise, he said it has been good so fine, noting that the democratic process is not easy to operate.

“The nation has chosen one of the best ways of choosing leaders, but it is not the easiest way.”

“Nigeria is getting there with resilience and strong determinations”.