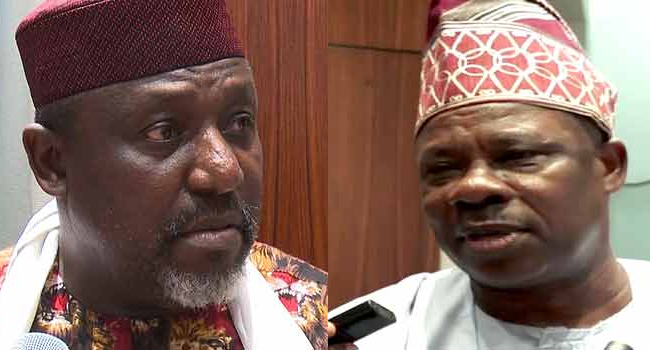 The National Working Committee (NWC) of the All Progressives Congress (APC) has suspended the governors of Imo and Ogun States, Rochas Okorocha and Ibikunle Amosun.

According to him, the NWC suspended the governors following the allegations of anti-party activities levelled against them.

Issa-Onilu disclosed that upon the suspension, the committee further recommended the expulsion of governors Okorocha and Amosun to the National Executive Council of the party.

He issued a statement, in which he revealed that the NWC also suspended the Minister of Niger Delta Affairs, Pastor Uguru Usani, and the Director-General of the Voice of Nigeria (VON), Mr Osita Okechukwu, allegedly for the same offence.

The APC spokesman said the decision was reached at a meeting of the committee presided by party’s national chairman, Mr Adams Oshiomhole, at the APC National Secretariat in Abuja.

He revealed that the NWC would issue a query to Ondo State Governor, Rotimi Akeredolu, for “his glaring anti-party activities”.

The party claimed that the action of the governor affected the fortunes of its candidates in the recently-conducted Presidential and National Assembly elections in the state.

The statement read, “Recall that the NWC had earlier written to the suspended governors on their anti-party activities, and several other steps were taken to ensure they desist from taking actions that are inimical to the interests of our party and candidates.

“Notably, these individuals have not shown any remorse and have actually stepped up their actions. The party reviewed the serial anti-party activities of the concerned individuals before and during the last Presidential and National Assembly elections in their respective states and resolved to enforce party discipline in line with our Constitution.

“The NWC noted how the suspended members have continued to campaign openly for other parties and candidates that are unknown to our great party, even while they have constituted themselves as opposition to APC candidates in their respective states.”

The APC said it was closely monitoring the activities of its members across the country, especially in the states the suspended members belong to.

It, therefore, warned its members who take any action in line with the directives of the suspended members to undermine its candidates in the coming elections would face disciplinary actions.

The ruling party congratulated its supporters on the victories recorded in the last elections, and particularly, the re-election of President Buhari for a second term.

“This could not have happened if not for the hard work and commitment of our members,” it said, adding, “We therefore urge all our members to unite and work ever harder to ensure victory for our candidates across the states in the coming governorship and House of Assembly elections.”

It, however, asked its members to disregard directives and actions of the suspended individuals, saying it would continue to live by the dictate of its Constitution.

Governor Okorocha contested for the Imo West Senatorial District seat while Governor Amosun contested that of Ogun Central in the just-concluded elections.

Both governors won the poll in their states, although the returning officer in Imo State said he declared Okorocha the winner “under duress”.

Okorocha is supporting his son-in-law and candidate of the Action Alliance (AA) in Imo, Uche Nwosu, to succeed him as governor, as against the APC candidate, Senator Hope Uzodinma.

On his part, Amosun is against the candidature of APC’s Dapo Abiodun in Ogun and is giving his support to the candidate of the Allied Peoples Movement (APM), Adekunle Akinlade.

Before he won the election, President Muhammadu Buhari had during his campaign visited Imo and Ogun States where some drama played out over the choice of candidates.

The atmosphere was tense at the rally in Ogun State where some supporters allegedly loyal to APM pelted the APC National Chairman, Adams Oshiomhole, while he was addressing the gathering, forcing him to end his speech abruptly.

The Peoples Democratic Party (PDP) had mocked the APC following the incident, while the ruling party vowed to sanction Governor Amosun after the elections.