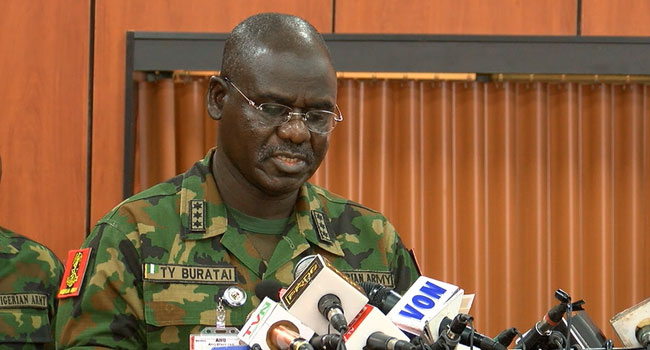 To end the spate of insurgency in the country, the Chief of Army Staff, Lieutenant General Tukur Buratai, believes that improved infrastructure and education have crucial roles to play.

The Army chief who visited the acting Edo State Governor, Philip Shaibu, on Monday stated that such provision would keep the youths engaged.

“The mobilisation for the development of the areas is very important; infrastructure has to be fully on ground to ensure that this ugly trend does not come,” said Buratai.

He also expressed the willingness of the Nigerian Army to maintain a cordial relationship with the civilian public.

The army boss explained that this would enhance the exchange of vital information on the activities of criminals in the society.

He added, “Education is also very important and the public support, to ensure that they provide timely intelligence and information on the movement of social miscreants and criminal elements.”

In his reaction, the acting governor appreciated the efforts of the army in restoring peace across the country.

He used the opportunity to call on lawmakers in the country to make provision for more funding for the military to enable them to function more in their duties.

Shaibu said, “Thank you for what you have done in the north-east and we also appreciate you for the peace in the south-south.”