Protesters on Tuesday continued their agitations against police brutality and high-handed operations of the Federal Special Anti-Robbery Squad (F-SARS).

Hundreds of protesters march on the major streets of Port Harcourt after they initially assembled at Pleasure Park.

Port Harcourt protesters defied the order given by the state governor Nyesom Wike who on Monday said it has prohibited all forms of protest in the state.

In Enugu, the protesters gathered early in the morning and marched major streets in the city. Police Officers can be seen on the ground to provide protection for the protesters.

This is the first march in Enugu since the campaign against police brutality and operations of FSARS commenced in Nigeria. The group is expected to match the government house and state police command to register their complaints.

Music artistes Flavour and Phyno were also part of the protest in Enugu. Thousands of protesters gathered at the popular ‘globe’ along Wellington Bassey Way. They insisted that they should be addressed by the state governor Emmanuel Udom. The protesters marched to other parts of the city to express their grievances on the killings and brutality by SARS operatives. All adjoining roads to the secretariat were blocked as a result of the activities of the protesters who demanded to be addressed by the State Governor Seyi Makinde.

The Deputy Governor Rauf Olaniyan however addressed the protesters and informed them that Governor Makinde is currently in Ogbomoso.

In solidarity with the protesters, the deputy governor carried placards and joined voices with them, condemning police brutality and harassment.

Governor Babajide Sanwo-Olu on Tuesday showed his support for the EndSARS campaigners by carrying a placard and marching with them.

He shared photos on his twitter page and announced that he has received a letter of their demands.

Stay with us for more updates…

The public outcry and protest against police brutality and operations of the Federal Special Anti-Robbery Squad (F-SARS) continued on Monday with Nigerians making more demands.

The Inspector-General of Police, Mohammed Adamu had earlier announced the dissolution of the F-SARS after days of protests across the country.

The protest continues across the country continued on Monday with the protesters demanding the immediate release of all arrested protesters; justice for all deceased victims of police brutality and appropriate compensation for their families and setting up an independent body to oversee the investigation and prosecution of all reports of police misconduct (within 10 days).

Other demands include psychological evaluation and retraining of all disbanded SARS before they can be redeployed and increase in police salary so that they are adequately compensated for protecting the lives and property of citizens.

The police unit was founded in 1992 to combat cases of armed robbery, kidnapping, and other violent crimes. But SARS, instead, over time, has gained notoriety for its reckless intimidation of innocent civilians through puerile profiling and wanton abuse of power.

Read on for updates about the latest developments from and around the protests:

Protesters laid siege to the Lekki toll gate, along the Lekki-Epe Expressway. They gathered at the toll gate as early as 5:00 am to protest police brutality and demand scrap of the F-SARS unit of the Nigeria Police Force (NPF). Their activities grounded vehicular traffic along the expressway forcing commuters and motorists on their way to work to a standstill.

Several residents who have to access the toll gate to get to work said they had returned home because of the massive traffic.

10:02am: Jos Residents Demand Justice For Victims Of #EndSARS Protests

A group of concerned youths in Plateau, the capital of Jos joined the protest as they marched along major streets of Jos metropolis.

Displaying placards with different inscriptions, the protesters are calling for the immediate release of all arrested protesters as well as demanding justice for all deceased victims or police brutality and appropriate compensation for their families.

Other demands include the setting up of an independent body to oversee the investigation of police misconduct and increase in Police salary so that they are adequately compensated for protecting the lives and properties of citizens. 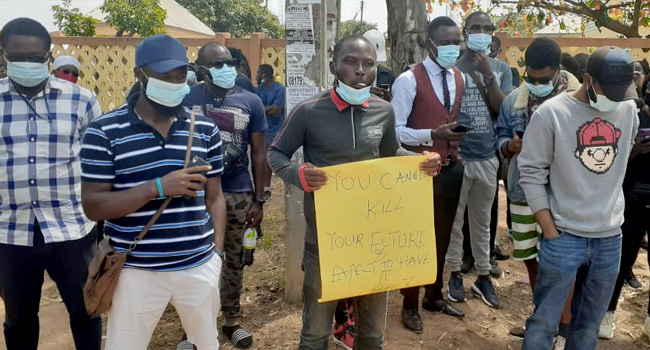 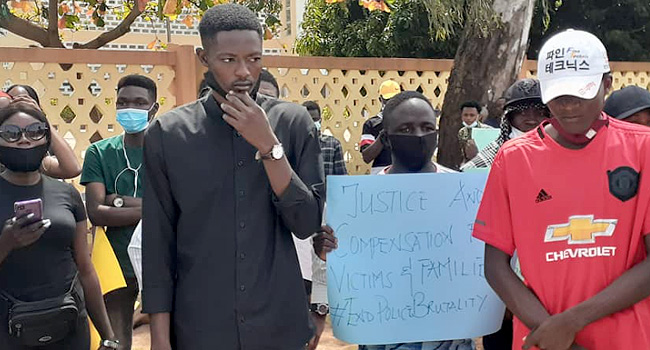 President Muhammadu Buhari reacted to the outcry on the reform of the Nigeria Police Force (NPF) promising to extensively reform the Force.

The President declared that the disbanding of the Special Anti-Robbery Squad (SARS) is the first step to extensive police reforms by his administration.

He disclosed this while delivering a speech at the launch of the presidential youth empowerment scheme at the State House in Abuja.

He also promised to ensure that all those who are responsible for the misconduct or wrongful acts are brought to justice.

1:40 pm At Least One Killed In Surulere #EndSARS Protest

One person has been reported killed in the Surulere area of Lagos State in the ongoing protest against police brutality and extra-judicial killings.

According to eyewitnesses, the victim was hit by a stray bullet after the police officers shot indiscriminately to disperse the protesters.

Efforts by the medical team at the scene of the protest to resuscitate him proved abortive as he died at the scene. Another protester was shot in the leg and quickly rushed to the hospital.

Vice President Yemi Osinbajo also reacted to the disbandment of the Special Anti-Robbery Squad (SARS) by the Inspector-General of Police Mohammed Adamu and the ongoing protests.

The Vice President said the SARS disbandment is the first step to Federal Government’s commitment to the reform in the police.

He also called for an end and reform in the Nigerian Force Force.

Read more and watch video below

Music Legend Femi Kuti joined other Nigerians in the ongoing protest calling for an end to police brutality by men of the Special Anti-Robbery Squad.

The protesters are calling for an end to SARS, reforms in the police, the release of some of the protesters who were arrested by the police during last week’s protests, prosecution of the officers that killed these victims, and compensation for the families of the deceased.

They are also calling for an end to police brutality, insisting that President Muhammadu Buhari should make the pronouncement disbanding SARS by way of an executive order.

Read more and watch video below

Lagos State Governor, Babajide Sanwo-Olu has told protesters that their voices have been heard.

The Governor said this on Monday while addressing the protesters in Lekki where youths camped and blocked the expressway.

The Ooni of Ife, Oba Adeyeye Ogunwusi has backed the #EndSARS protests sweeping across the country, hailing Nigerian youths for agitating against police brutality.

“The #ENDSARS movement has brought nothing but joy to me,” the Ooni tweeted on his handle on Monday; a statement equally confirmed to Channels Television by the Director of Media to the monarch, Comrade Moses Olafare. “Finally, the youths are awake, with one voice and a common goal.”

Singer, David Adeleke, popularly called Davido has presented the demands of the #EndSARS protesters to the Inspector General of Police, Mohammed Adamu at the Force Headquarters in Abuja, the nation’s capital.

The demands, according to him include the release of the protesters, justice for all victims of police brutality, among others.

“Our five demands include the immediate release of all arrested protesters. We thank God everybody was released in Abuja yesterday, there are still some people arrested in Lagos.”

Police officers attached to the Ogun State Police Command have allegedly assaulted a journalist, Tobi Adepoju and other protesters during an #EndSARS protest.

In a video clip obtained by Channels Television on Monday, the reporter was repeatedly hit by police operatives at the Ajuwon police station.

He explained that the protesters mobilised themselves for a peaceful march around Alagoble, Akute, Ajuwon and Iju communities before the incident occurred.

10:49 pm #EndSARS: This Movement Is Also For You, Ooni Of Ife Tells Police Officers

The Ooni of Ife, Oba Adeyeye Ogunwusi believes the recent waves of #EndSARS protests in Nigeria will equally be beneficial to officers of the Nigeria Police Force (NPF).

“To the men and women of the Nigerian police force,” he tweeted on Monday via his official handle, “be assured that this movement is also for you, we know you are humans also and your reality is as a result of your environment.”

While condemning reports of brutality and abuse by operatives of the Special Anti-Robbery Squad (SARS), Oba Adeyeye hailed Nigerian youths for agitating for an end to the ugly incidents.

And that is all for today’s updates on the #EndSAR protests in the country.  Fresh updates about the agitations will be published tomorrow.

#SARSMustEnd Protests: NBA Condemns Use Of Live Ammunition By Police