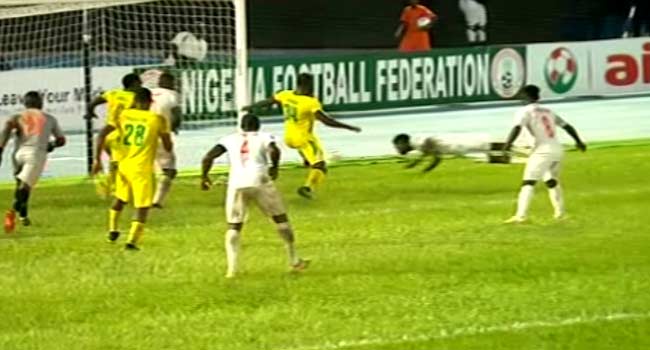 Enugu Rangers produced a dramatic comeback to level 3-3 draw with Kano Pillars at full time on Wednesday at the Stephen Keshi Stadium in Asaba, Delta State.

The South-East based club then went on to beat Pillars 4-2 via penalties to emerge champions of the 2018 Aiteo Cup.

The game started at a high tempo with Kano Pillars taking the lead as early as the fifth minute when midfielder Rabiu Ali fired in a fierce shot from a close range.

Moments later, Ibrahim Alassan’s corner kick was pushed into a goal by Rangers goalkeeper, Femi Thomas, to ensure Kano Pillars takes a 2-0 lead into the break.

At the start of the second half, Nyima Nwagua scored the third goal for Pillars, leaving Rangers with a huge mountain to climb.

However, the comeback fight for the Rangers started in the 77th minute when Kelvin Itoya scored a stunner.

Chidera Ezeh kept hopes alive when he scored the second goal for the Enugu side in the 82nd minute.

Kano Pillars had a chance to seal victory but Junior Lokosa’s effort was stopped by Nana Bonso.

On the other end, Ajani Ibrahim produced an unbelievable header to level the scores and send the game to penalties.

Isaac Loute took the decisive kick for Rangers and scored to secure an incredible victory for the Enugu based club.

It is the first FA Cup win for Enugu Rangers since 1983.

The team have also picked a ticket to next season’s CAF Confederation Cup. 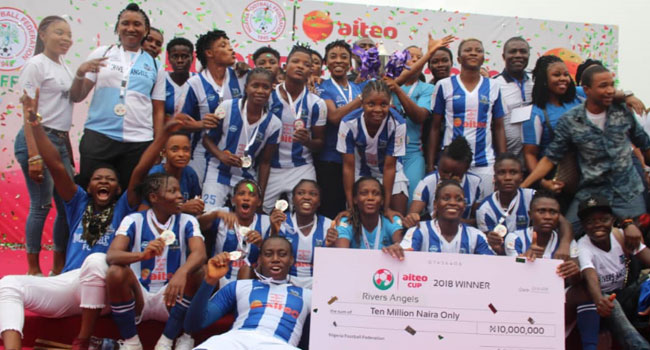 This is the 8th time they are winning the FA cup since 2010.

The governor, in a statement signed by his Special Assistant on Electronic Media, Simeon Nwakaudu, on Wednesday, said the team “have continued to be worthy ambassadors of the state with their superlative displays on the field of play.”

Wike also reiterated his administration’s commitment to supporting the ladies in their quest to win more laurels for the state.

The game was played at the Samson Siasia Stadium in Yenogoa, the Bayelsa State capital with President of the Nigeria Football Federation (NFF), Amaju Pinnick and chairman of the Nigeria Women’s Football League (NWFL) Aisha Falode in attendance. 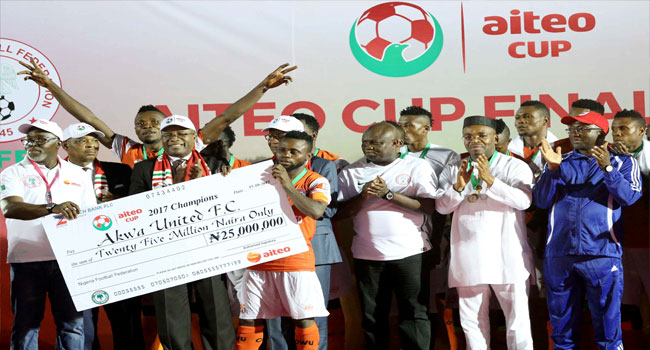 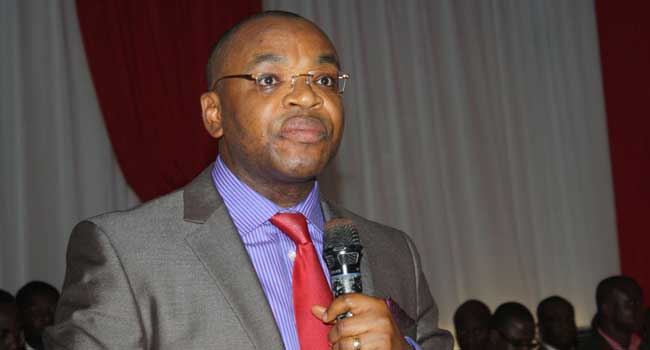 Akwa Ibom State governor Udom Emmanuel has called for an upward review of the prize money for the winner of the Aiteo Cup.

According to the governor, the current N25 million prize money is too meagre for a competition of that magnitude.

Governor Emmanuel made the call when the Aiteo Cup recently won by Akwa United was presented to him during the October edition of the state executive council meeting at the exco chambers of the Government House, Uyo.

He said the victory of Akwa United further demonstrated that with the right passion and commitment, success can be achieved.

“The victory of Akwa United has once again proven that with passion and true commitment, we can achieve anything we set out to achieve. This is a lesson which we, especially our youths must learn,” he said.

“Let me use this opportunity to say this; the prize money of N25 million naira for the competition is rather too meager for a competition of that magnitude… The highest football competition in the country”.

The governor regretted that in spite of the enormous contribution of the Akwa Ibom State government to ensure the qualification of Nigeria ‘s Super Eagles to the 2018 World Cup, the Nigerian football governing body has not deemed it necessary to show any official appreciation.

“As a state, we had put in so much, we worked very hard to host the Super Eagles in Uyo. We did a lot to spur the team to victory. But I’m surprised that up till this moment I am talking to you, we have not received any official appreciation from the football management body.”

The Commissioner for Youth and Sports, Mr Monday Uko, attributed the victory of Akwa United to the support of the state government.

He said, “In all honesty, let me say that the Akwa United’s victory would never have been possible without the effective support of the governor. So, I must thank the governor for his commitment and deep-rooted interest in sports as a whole.”

The state executive council also approved that the Akwa Ibom state government-owned Tropicana Entertainment centre in Uyo, the state capital, be leased to a private consortium.

The October edition of the state executive council meeting was preceded by Governor Udom Emmanuel.

Akwa United beat Niger Tornadoes on penalties to win the 2017 Aiteo Cup after a 0-0 draw in Sunday’s final in Lagos.

Striker Gabriel Okechukwu scored the decisive spot-kick in sudden death to win the shoot-out 3-2 after both teams failed to score in a drab match.

Substitute Okechukwu had failed to convert the biggest chance of the day in the 85th minute when he was clear on goal with only goalkeeper Mustapha Aliko to beat.

The victory means that Akwa will play in the CAF Confederation Cup next season, having lost in the 2016 preliminary round.

In a dire first 45 minutes, Friday Ubong was denied a clear sight on goal by a timely header from Niger Tornadoes defender Reuben Ogbonnaya.

Musa Newman was let down by a poor first touch just before half-time, with the teams having to wait until penalties to decide the final. 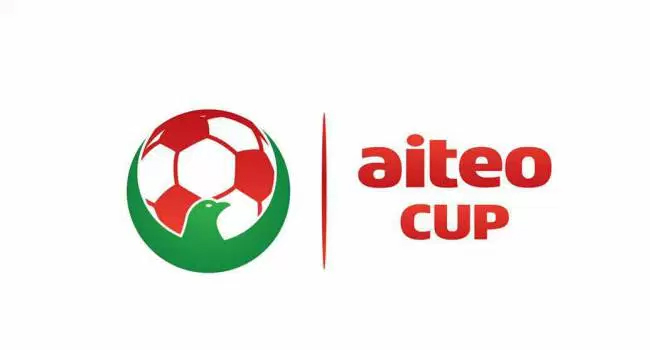 The Minna club won the semi-final first leg 4-2 in Lokoja at the weekend, before they lost the return leg 1-0 in Nnewi on Thursday.

Niger Tornadoes will now wait for the winners of the other semi-final between Akwa United and Sunshine Stars which comes up on Sunday, October 8 at the Godswill Akpabio International Stadium Uyo.

The draw for the 2017 AITEO Cup round of 32 was held on Friday and some interesting fixtures emerged in the process.

See the full results below:

BAYELSA QUEENS
MEN’S ROUND OF 32 FIXTURES