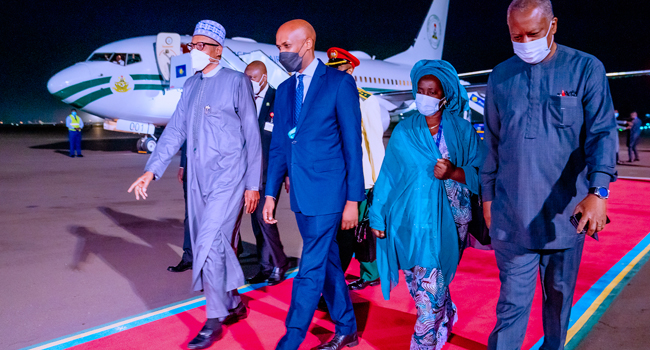 The meeting runs from June 22 to the 26th. He was received by the Rwandan Minister of Justice and Attorney General Emmanuel Ugirashebuja and Nigeria’s High Commissioner to Rwanda Aishatu Musa.

Buhari was accompanied by some government officials including the Minister of Foreign Affairs Geoffrey Onyeama.

Others were the Minister of State Trade & Investment Amb. Mariam Katagum and  Minister of Humanitarian Affairs Sadiya Umar Farouq.

The UN Deputy Secretary-General Amina Mohammed was also there.

The theme for CHOGM 2022 is ‘Delivering a Common Future: Connecting, Innovating, Transforming,’ and the Heads of Government are expected to reaffirm their commitment to upholding the Commonwealth Charter, which focuses on democracy, human rights, the rule of law, as well as economic opportunities and sustainable development. 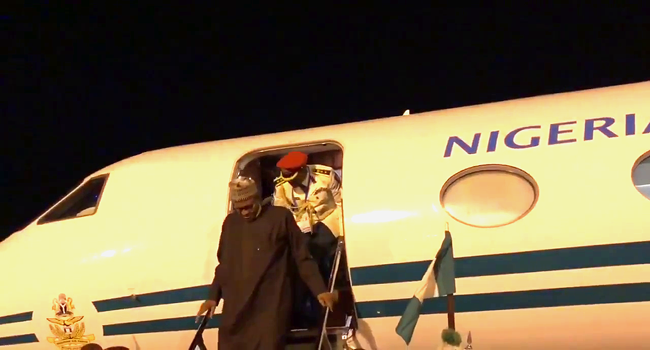 President Muhammadu Buhari has returned to Nigeria from London where he attended the Commonwealth Heads of Government Meeting (CHOGM).

The President took off from London on Saturday afternoon and arrived at Abuja after 7 pm.

President Buhari had travelled to London on April 9, shortly after declaring his intention to seek re-election at the All Progressives Congress’ National Executive Council Meeting in Abuja.

While attending CHOGM, the President called for more investments in Nigeria, pointing out that boosting trade and investment are the surest way of getting millions out of poverty.

He also called on Commonwealth heads of states to avoid trade warns, warning that it would hurt developmental efforts.

The President, however, courted controversy during the event when he said, “More than 60 percent of the population is below 30, a lot of them haven’t been to school and they are claiming that Nigeria is an oil producing country, therefore, they should sit and do nothing, and get housing, healthcare, education free.”

The comments elicited furious reactions from many Nigerians and sparked a debate with some defending the President and others criticising him.

Amid the controversy and negative reactions from opposition politicians and parties, the Presidency issued a statement clarifying the comments.


In the days before CHOGM, the President met and held talks with British Prime Minister Theresa May and the Arch Bishop of Canterbury, The Most Reverend Justin Welby, separately.

With The Most Reverend Welby, on April 11, President Buhari discussed the herdsmen-farmers crisis, Nigeria’s security challenges, explaining that the conflict was older than both of them.

He also said the situation was made worse by the influx of gunmen, who were trained and armed by Muammar Gadaffi, from the Sahel region into different parts of the West African-sub region.

Five days later, he told the British PM that while politicians are preoccupied with the forthcoming general elections, he is more concerned about the security of the people and the growth of the Nigerian economy. President Muhammadu Buhari believes violent extremism and terrorism can only thrive and endure if good people remain idle and complacent.

The Nigerian President shared this view with world leaders while speaking on behalf of other participating African Heads of State and Government at the closing Executive Session of the 2015 Commonwealth Summit in Malta on Sunday.

President Buhari said that he was confident that terrorism would be ultimately defeated with greater international cooperation and collaboration.

“We have had the opportunity to discuss, in a serene atmosphere, wide ranging issues that are of great significance, not only to the members of the Commonwealth, but to the entire global community.

“Of particular note is the Action Statement on Climate Change, which is expected to herald our commitment to saving the planet for present and future generations.

“Of equal significance are our deliberations on Radicalisation and Violent Extremism. We are witnesses to the growing phenomenon of terrorism that is affecting us all, whether big or small.

“The reign of terror will only succeed if peace-loving people choose to remain idle. But I am confident that through our collective efforts, we will defeat this scourge and restore peace,” President Buhari said.

The President also reaffirmed the unwavering commitment of Nigeria and other African member-countries to the promotion and protection of the core values of the Commonwealth.

“I came into power via democratic principles and values espoused by this same body. Nigeria as a country will continue to protect and promote these democratic ideals,” President Buhari assured heads of delegations at the session.

The President thanked the outgoing Secretary-General, Kamalesh Sharma for his exemplary service to the Commonwealth.

“We in Nigeria will not forget his five memorable visits to our country during his tenure. As this is his last CHOGM in his present capacity, I know I speak for my colleagues from Africa in expressing our immense gratitude and best wishes to him,” President Buhari said.

He also congratulated the Commonwealth’s Secretary-General-elect, Rt. Hon. Patricia Janet Scotland, and assured her of the full support of Nigeria and other African members of the Commonwealth.