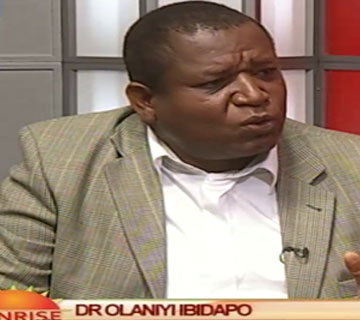 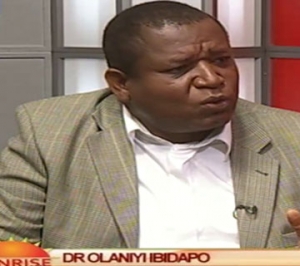 An Economist and Communication Strategist, Dr. Olaniyi Ibidapo, says stigmatization is one of the effects of any outbreak of diseases which comes out of fear, misinformation or misrepresentation of situations.

Speaking on Channels Television’s Sunrise Daily, he stated that except Nigeria comes up with “a legal policy and awareness creation among the populace, stigmatization would be a serious problem in the future.”

With a background of having done extensive research in Communications strategies with a bias for Health communication, Ibidapo recommended “multidimensional, multifaceted approaches” in sensitizing the populace on the facts about the Ebola Virus.

He explained that this is based on the notion that “the more the approaches, the more the effect of realising the goal.

“Most of these approaches are international templates that have not been adequately tested, so you cannot measure the effectiveness immediately. So you cannot rely on one approach,” he said.

Mass media, sensitization and training were among the approaches highlighted by Ibidapo but he noted that the community being involved remained an important feature in all the approaches.

He stated that the prevalence of the Ebola Virus Disease has been within the communities and “whatever the implementations you’re going to take on this Ebola outbreak, communities have to be involved.

“When I mean communities, it has to be the religious organisations, the MDAs, the NGOs, the individuals and the corporate bodies. This is the big opportunity for the corporate bodies in Nigeria to take advantage of, because Ebola is everybody’s business now.”

Speaking further on the issue of Ebola stigmatization, Dr. Ibidapo stated that Nigeria would need to improve its health infrastructure as this would help the country.

However, he noted, “Ebola victims need to come out and let people know they are still alive. That is why policy implication has to start because when Government backs it up with a law – Ebola health policy – this will help us in identifying and recognizing that we could curb Ebola spread.”

While he appreciated the Nigerian culture, which he says is communal and does not necessarily encourage the idea of victims coming out, he maintained that an upgrade of Nigeria’s health infrastructure would help build some confidence.


He also highlighted the level illiteracy in Nigeria as another challenge. “The population is huge, a lot of people are educated but are they really informed?”

The Consultant refused to blame citizens for the discriminative attitude towards Ebola survivors as he admitted that indeed fear was responsible for this, but “with information we will understand that once it is cured, it is cured.”

He made reference to a Channels Television report which featured an Ebola survivor who has suffered stigmatization.

“As we have seen, he is healthy, he is hale and he is active. The society needs to support him, the Government needs to back him up in terms of establishing a policy, making it a law and making sure that they prosecute any offender.

“It is an offence to infringe on the other person’s human rights – rights of association and right to work. It is a serious offence within our system here.”

He called for support for the survivors of the EVD, with emphasis on the need for everybody to be involved.

The Minister of Health, Prof Onyebuchi Chukwu, has called for collaboration across board to combat the challenges posed by the Ebola virus.

Prof Chukwu, who was speaking during the launch of the Defence Identification Centre, urged the military to use it’s expertise in high tech medicine to help other health centres in finding a cure to the deadly Ebola disease.

Beyond aiding the military in it’s operations, Prof Chukwu believes the centre provides an opportunity to help the government combat some health challenges confronting the nation. He urged the military to ensure the centre is maintained to add value to the nation’s economy.

Prof Chukwu added that “now that the armed forces is going into high technological molecular diagnosis, it will be important, even in the context of the recent challenges of Ebola outbreak, to extend this facility to other diagnostic facilities; key ones, particularly areas you think members of the armed forces could be exposed to in modern warfare.

“It will be necessary that as an adjunct, since you are already moving into molecular medicine; high tech medicine, that you also begin to think of how to make proper diagnosis in each of these centres that are linked to this major Defence Identification Centre,” he said.

The Chief of Defence Staff, Air Chief Marshal Alex Badeh, while responding to the call, noted that the hazards of counter terrorism has made it imperative for the Nigerian military to continue to make technological advancements, including the DNA Centre, designed for the identification of the casualties of war and terrorism.

Air Chief Marshal Badeh also noted that “on a few occasions were multiple fatalities were recorded and corpses could not be identified, mass burials were resorted to” adding that such burials deny the heroes the privilege of being buried properly, while robbing the bereaved families the honour and satisfaction of their loved ones given befitting burials.

Ebola hemorrhagic fever (Ebola HF) is one of numerous Viral Hemorrhagic Fevers. It is a severe, often fatal disease in human beings.

Nigeria has announced plans to begin screening of outbound passengers at its borders, as a way of curbing the spread of the Ebola Virus disease which has taken hundreds of lives in West Africa.

The Health Minister, Professor Onyebuchi Chukwu, announced the plans to diplomats at a meeting in Abuja on Thursday.

The Minister told the gathering that the government had not taken a decision to close its borders as a result of the outbreak of the disease.

“The government has intensified screening of inbound passengers on land, sea and airports,” Professor Chukwu said.

The fear of the Ebola Virus and the high mortality rate associated with it has created widespread panic locally and internationally, prompting the interactive meeting by the Nigerian government with diplomats on measures taken to contain the disease.

Intense training and public awareness on the virus is under-way, according to the Minister of Health.

At present, 70 primary contacts with Patrick Sawyer, the Liberian that died on July 25 after he was diagnosed of the Virus, are under surveillance.

A nurse that was among medical officials that treated the Liberian died on Wednesday of the Ebola Virus while five other persons have tested positive to the Virus.

Despite the panic, the Health Minister says the country would not close its borders in order to speedily identify victims of the virus.

A governor of the opposition All Progressives Congress and the Governor of Lagos State, where the Ebola cases have been reported, Mr Babatunde Fashola, had earlier asked the government to close the country’s borders as a way of checking the spread of the disease.

Meanwhile, the Economic Community of  West African States’  secretariat has announced a temporary shut down of its Lagos office where some of its personnel who had contact with the late Patrick Sawyerr work.