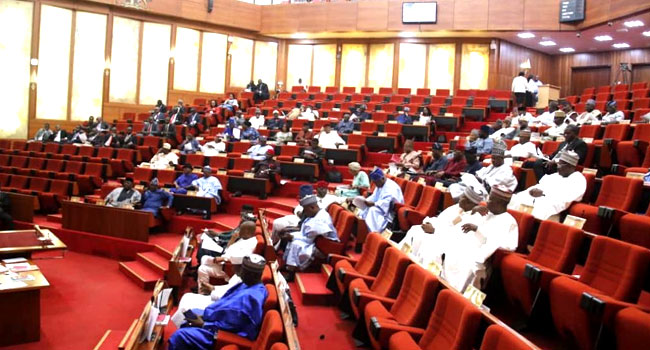 The bill seeking the establishment of a commission to prosecute electoral offenders in the country has passed second reading in the Senate.

During Wednesday’s plenary, a bill for an act to establish the South West Development Commission was also read and passed for the second time.

Both bills were sponsored separately by Senator Abubakar Kyari and Senator Ibikunle Amosun.

In his presentation, Senator Kyari explained that the eventual passage of the electoral bill would help tackle rigging, vote-buying, violence, waste of resources, and other offences that weaken the nation’s electoral process.

On the other hand, the South West Development Commission seeks to act as a catalyst to develop the commercial and industrial potentials of the region.

According to the sponsor of the bill, the commission will receive and manage funds from Federation Allocation for the agricultural and industrial development of the South West, and for any other related educational backwardness as well as security and development challenges and other connected matters.

In his contribution, Senator Teslim Folarin declared his support for the bill, adding that the bill sought to set up a commission to offer assistance and look at what was best for the region.

“I rise to support this bill and I am very conscious of so many things. There are certain things that are peculiar to the South West for which this commission, when set up will take control,” Senator James Manager said.

Another lawmaker, Senator Ayo Akinyelure was confident that the bill would go a long way to resolve problems in the region and bring development closer to the people.

Senators Emmanuel Bwacha, Obinna Ogba, and Basiru Ajibola among others also declared their support for the bill.

But two lawmakers, Senators Adamu Bulkachuwa and Peter Nwaoboshi were against the bill, saying it would split up the country.

After a series of deliberation, Senate President Ahmad Lawan referred the bill to the Committee on Establishment and Public Service Matters.

He asked the committee to report back to the lawmakers within four weeks. 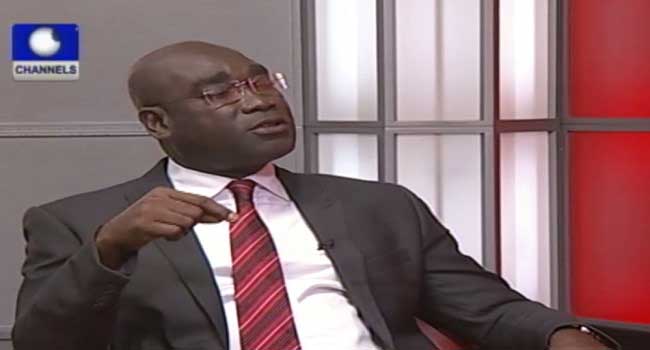 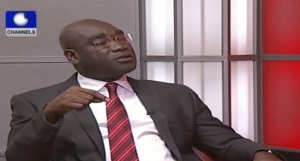 A Legal Practitioner and observer during the 2015 elections, Ikechukwu Ikeji, says the just concluded election was one of the most rigged elections he had ever witnessed in Nigeria, despite being considered free and fair.

Speaking on a breakfast show, Sunrise Daily on Channels Television on Monday, Mr Ikeji accused INEC officials of being compromised, stressing further that the politicians themselves were out to rig and those who won simply outwitted those who lost.

“Just about every politicians I came across was in the game of rigging. Nothing can be farther from the truth than that these elections were fair and free.

“In fact I have to be honest, this is one of the most rigged elections I have witnessed. I was in the field and I can tell you that electoral offences were rampant,” Mr Ikeji said.

On card readers, the election observer expressed dissatisfaction. He said that the card readers did not work in many areas he went to.

He said that they (the electorate) had agreed not to use the card readers, revealing that he clearly saw people coming back to vote twice while some voted three times in both national and state elections.

He added also that some polling units were dominated by some political parties, as they were able to buy the minds of voters and the electoral officials.

Mr Ikeji also said that all materials for the election should have been present at the commencement of the voting, including the result sheets, which various political party agents should verify.

He also indicted some election observers saying many of them were compromised and carried out their duties with bias.

He reacted to the statement by the Independent National Electoral Commission (INEC) that it had commenced the compilation of all electoral offences recorded in the 2015 general elections with a view to prosecuting those found wanting.

The legal practitioner said that it was a good statement by INEC that they would prosecute electoral offenders, but noted that the solution does not just lie in advocacy, pronouncement or trying to put technology in place to obviate the need for politicians to rig.

He advised that the attraction in elective and political public positions be reduced to discourage politicians wanting to get to position by all means. 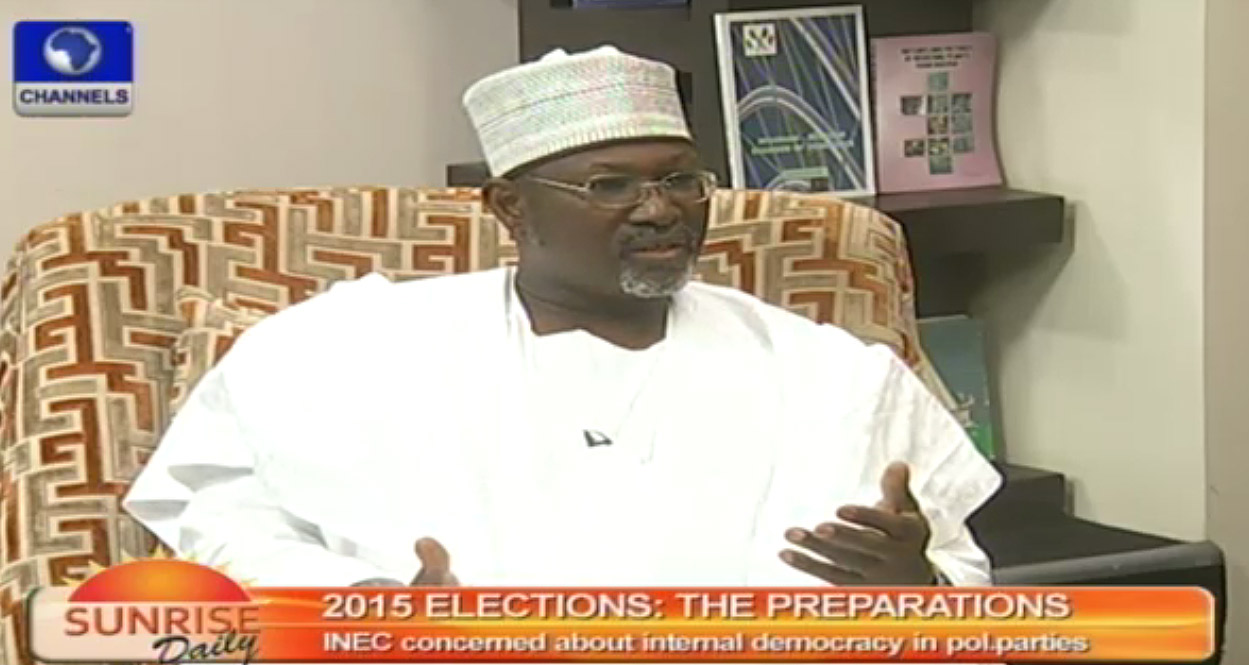 The Chairman of the Independent National Electoral Commission (INEC), Attahiru Jega on Monday said that the commission has investigated and prosecuted over 200 persons who allegedly breached the electoral laws.

Mr Jega, who was a guest on Channels Television’s breakfast programme, Sunrise Daily, accused Nigerian politicians of always seeking to ‘jump the gun’ during elections. He said INEC has done its best in checking this trend.

“I want to say categorically, we have done or best. We have prosecuted over 200 people successfully,” he said.

He said some of the electoral offenders, including members of the National Youth Service Corp (NYSC) and INEC staff have been fined or jailed.
“Before our commission was inaugurated, there was no record of a single successful prosecution of electoral offences,” Mr Jega said.

He said though the number represents a drop in the ocean, the commission had reasons to prosecute about one million people over multiple registrations.

“On registration alone, we do have evidence to prosecute close to a million people for clear cases of multiple registrations,” he said.
He said the commission lacks the resources and personnel to prosecute all these offenders.

Mr Jega said INEC is currently working on how to relinquish the responsibility of prosecuting electoral offenders to another agency.

He said, “We are partnering with the NBA (Nigerian Bar Association), in fact, we have been discussing this partnership and now we are taking it a level higher and our hope is that before we commence the process of continuous voters’ registration, which we hope will commence by the third quarters which is July – September God willing, we also want to make example of those who have done multiple registration.

“We will do it, but it is very challenging. The best thing is to have another agency that can actually handle prosecution of electoral offenders.”

Mr Jega said managing logistics during elections is a major problem that INEC have been contending with for a long time insisting that the commission has done its best to minimise this challenge.

He said, “I want to assure you that globally, there’s no country where you can say it is 100 percent free of this challenge of late arrival of materials.”

He said since he assumed office, the commission has been partnering with the security agencies to hasten the deployment of materials to areas with troubling terrain.

“Where it is necessary to move material by aircraft or helicopter, the navy helped us during the 2011 elections. Where it was to move it in the riverine areas the navy helped us and even provided security to minimise challenges arising from the activities of militants groups,” the INEC boss said.

He said INEC devised a strategy of deploying materials to areas far from the city centre before deploying to closer areas but that this, as it happened in the recent Edo Council polls, has its own challenges.

He said the commission has reduced the incidences of late arrival of material to election venue by about 60 percent since 2011.

He said, “Certainly, some staggering helps the process. The kind of staggering we have now in terms of saying this kind of elections should take place now and then you sequence it; that kind of sequencing of major elections, I think has been helpful, it helps us to focus and it helps us to poll resources together and to deploy them appropriately.

He said, “But if you take staggering to a staggering extent, if I can put it that way, really it will also have its own challenges. It means for example if we have to every election state by state in all the 36 states and the FCT it will take us three years.

“If you are doing Presidential election for example, you have to do it nationally and in every place because the results have to be announced for a candidate to be returned.”

“If you legalise it by saying do elections state by state or do election region by region, you will create additional problems which are not presently anticipated,” he said.

The INEC chairman said the commission at the moment does not have any legal bottleneck and is not hindered from seeking innovative methods of conducting its operation even with the use of technology.

He said the commission had sent a recommendation to the National Assembly that as they review the 1999 constitution to “look at that provision and perhaps remove that prohibition. So that once it is removed we may not be able to do it in 2015 but we can begin to experiment and identify which models are suitable to Nigeria.”

Mr Jega said before the 2015 general elections, INEC will distribute permanent voters’ card to all registered voters in Nigeria.

The voter cards are to replace the temporary ones issued at the end of the voters’ registration in 2011. The cards are valid for 10 years.

Last year, the Federal Government approved N2.6 billion for the printing of 40 million out of the 75 million permanent voter cards in the first phase of the project.

The government has approved additional N33.5 million for the project’s second phase.

Mr Jega said “the permanent voter cards are chip-based carrying all our biometrics that was captured during the registration.

“We intend on election day to use a card reader to verify and to authenticate who is the true owner of that card. We believe that once we are able to do this successfully, then all these phenomenon of politicians purchasing voter cards and giving it to other people to come and vote with it on Election Day will be eliminated.”

The INEC chairman said all registered voters must vote at the point where they have registered.

Mr Jega disclosed this in response to a question tweeted-in by a lady who was watching the live programme on Channels Television from Abuja.

However, when a voter relocates, Mr Jega said “the electoral act clearly specifies what to do. You can change or transfer your registration status. All she needs to do in her case is to apply to the Resident Electoral Commissioner in the FCT giving all the necessary information why she has moved, what were the details of her previous registration, what was her polling unit and where is she now located.

“Once she does that application and it is verified, her details will be transferred to her new place and then we will issue her a permanent voter card in the new place.”