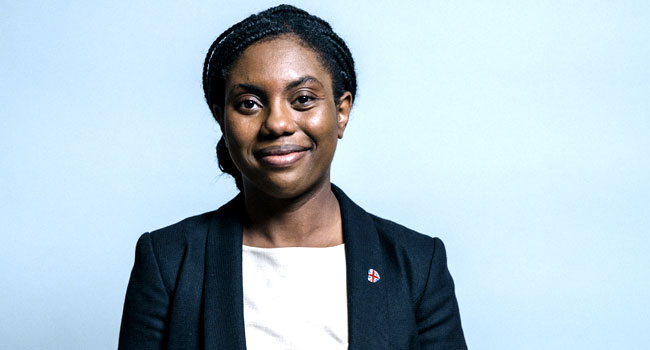 Prime Minister of the United Kingdom (UK), Liz Truss, has appointed Kemi Badenoch as the new Secretary of State for International Trade and President of the Board of Trade.

Ms Badenoch, who was born Olukemi Olufunto in Wimbledon, London to parents of Nigerian origin, is also the MP for Saffron Walden.

Her appointment comes hours after Truss assumed office as Britain’s third woman prime minister and new Leader of the Conservative and Unionist Party, taking over from Boris Johnson who held the position since July 2019.

The 42-year-old’s appointment was announced on the verified Twitter page for the office of the UK Prime Minister based at 10 Downing Street.

Kemi Badenoch MP @KemiBadenoch has been appointed Secretary of State for International Trade and President of the Board of Trade @TradeGovUK.#Reshuffle pic.twitter.com/DbU55lGD8q

In her reaction, she promised to commence the process that would lead to the creation of more jobs and better economic opportunities for people across the UK.

Before her appointment as UK Secretary of State for International Trade, Badenoch served as British equalities minister during Johnson’s tenure.

She previously held roles as Exchequer Secretary to the Treasury and Parliamentary Under-Secretary of State at the Department for Education.

Delighted to start my new job at @tradegovuk!

Looking forward to unleashing Global Britain’s full potential so we can create more jobs, more growth and more opportunity across the UK 💪 pic.twitter.com/XhQDPwtY9I

Badenoch is also a former Vice-Chair of the Conservative Party and former member of the Justice Select Committee. Prior to her election as a Member of Parliament, she was a Conservative member of the London Assembly, acting as the GLA Conservative’s spokesperson for the economy.

All the former contenders, however, lost the UK top job to 47-year-old Truss who has been the Member of Parliament for South West Norfolk since 2010.

Former British equalities minister, Kemi Badenoch, has launched a bid to become the next prime minister of the United Kingdom and leader of the Conservative Party, a declaration that has continued to attract public endorsements.

Ms Badenoch, who was born Olukemi Olufunto in Wimbledon, London to parents of Nigerian origin, joined the race to succeed scandal-dogged Prime Minister Boris Johnson as Conservative leader on Saturday.

She was one of the nearly 60 members of parliament and aides who quit last week after Johnson apologised for appointing a senior colleague facing sexual assault claims to a prominent role.

The UK prime minister was last week forced to resign, although he said he would stay in office until his successor was appointed.

While announcing her bid for the UK’s top job in an article published in The Times newspaper, 42-year-old Badenoch and MP for Saffron Walden called for change, saying the British public was “exhausted by platitudes and empty rhetoric”.

“I’m putting myself forward in this leadership election because I want to tell the truth,” she said. “It’s the truth that will set us free.

“Without change the Conservative Party, Britain and the western world will continue to drift” and rivals will “outpace us economically and outmanoeuvre us internationally.”

Her declaration has attracted a number of public endorsements, including by some members of the British parliament such as Neil O’Brien, MP for Harborough; Michael Gove, MP for Surrey Heath; and Gareth Bacon, MP for Orpington.

As a campaigner, focused on getting colleagues re-elected I know how the Westminster bubble is so detached from voters – @KemiBadenoch will smash through this disconnect and deliver on what ordinary people want. This is how we renew as Party and win the next General Election

I’m backing @KemiBadenoch because she’s brave, she stands up for common sense regardless of the flak she gets from the left (who can’t work out what to do about her 🤯) and she demonstrates the principled, consistent values that our country needs… #KB4PM https://t.co/tY9Wr6B0kI

I am backing @KemiBadenoch to lead our party and our country. She is a passionate defender of free speech, free markets and British institutions at a time when woke activists and separatists threaten these values and our precious United Kingdom. 1/2https://t.co/ZlePoR7xYv

Integrity. Intelligence. Instinct. Industriousness. @KemiBadenoch demonstrates all of these qualities and that is why I am supporting her for Leader and PM. #KB4PM. https://t.co/s6koRZRu4d

The new Conservative Leader needs to be someone with energy, clarity of vision, sound Conservative principles and the bravery to stand up for those values. @KemiBadenoch demonstrates all of these qualities which is why I am backing her. #KB4PM pic.twitter.com/kDUtHE88Fi

– She’s principled & courageous
– At DLUHC I was impressed by her attention to detail, calm judgement & ability to get things done
– Smart & listens to both sides of an argument
– Will unite the party & appeal to a broad range of people

Kemi is bringing together serious reformers with the experience to take on the challenges ahead. Great to see quote from Lord Agnew here, backing her. We worked together in Cabinet Office and his understanding of gov machine and how it needs to change to deliver is second to none https://t.co/6Y86ilpdJJ

I am supporting her to be the next leader of the Conservative Party and our next Prime Minster https://t.co/d3TWSa5Iq1

1st rule of politics: always elect the leader your opponents least want to face. So surely @Conservatives MPs should be supporting @KemiBadenoch. Intelligent, clear-headed and none of the baggage of other candidates. Delighted to see that @EddieHughes4WN agrees #Toryleadership

New PM To Be Named

Badenoch has previously held roles as Exchequer Secretary to the Treasury and Parliamentary Under-Secretary of State at the Department for Education.

She is also a former Vice-Chair of the Conservative Party and former member of the Justice Select Committee.

Prior to her election as a Member of Parliament, she was a Conservative member of the London Assembly, acting as the GLA Conservative’s spokesperson for the economy.

Meanwhile, the ruling Conservative party has said a new UK prime minister to replace Johnson would be announced on September 5 with 11 hopefuls vying for the job.

The influential 1922 Committee of non-ministerial Tory MPs in parliament on Monday outlined a timetable for the party’s leadership election.

Nominations are scheduled to officially open and close on Tuesday, with a new prime minister set to be installed when parliament returns from the summer break on September 5, said Chair of the 1922 Committee, Graham Brady.

Tory MPs will whittle the current list down to a final two through a series of ballots, with the worst-performing candidate eliminated after each round, before party members choose the winner.