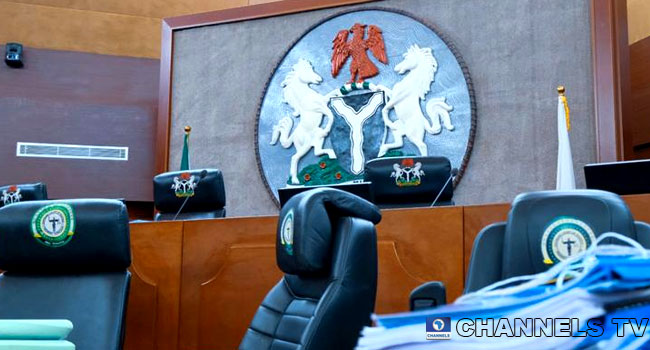 The Supreme Court will on Monday, deliver judgement in the appeal filed by the Peoples Democratic Party, and its candidate in the Kogi Governorship Election, Musa Wada, challenging the election and victory of the All Progressives Congress (APC) candidate, Yahaya Bello as the Governor of Kogi State.

Last week, A seven-man panel of the Supreme Court presided by the Chief Justice of Nigeria, Justice Tanko Mohammed heard the appeal filed by Mr Wada and fixed August 31 to deliver judgement.

Mr Wada who lost his appeal at the Election Petition Tribunal claimed that the Kogi election held on November 16, 2019, was riddled with serious electoral infractions, when he approached the Supreme Court after his petition was dismissed by the Court of Appeal on July 4th, 2020 with a split decision of two to one.

A five-man panel of justices of the appeal court upheld Governor Bello’s election and ordered Mr Wada to pay a sum of N100,000 each to Governor Bello, the All Progressives Congress (APC), and INEC, who were listed as respondents in the appeal.

The apex court will also give a verdict in the appeal filed by the Social Democratic Party and its candidate, Natasha Akpoti.

Lawyer to Governor Bello, Joseph Daudu, and that of the Independent National Electoral Commission (INEC), Dr Alex Izinyon, urged the court to dismiss the appeal filed by Mr Wada through his lawyer, Jibrin Okutepa, for lacking in merit.

Mr Daudu asked the apex Court to toe the line of the Court of Appeal and the election petition tribunal which gave concurrent decisions by dismissing Mr Wada’s petition.

Meanwhile, the second appeal filed by the SDP and its candidate asked the apex Court to set aside the findings of the Court of Appeal and the Tribunal and allow their appeal to succeed.

The Appeal Court had held that Akpoti could not prove the allegations of corruption and voter intimidation against Governor Bello.

On November 18, 2019, INEC returned Bello as the duly elected governor having scored the highest number of votes in the keenly contested poll. 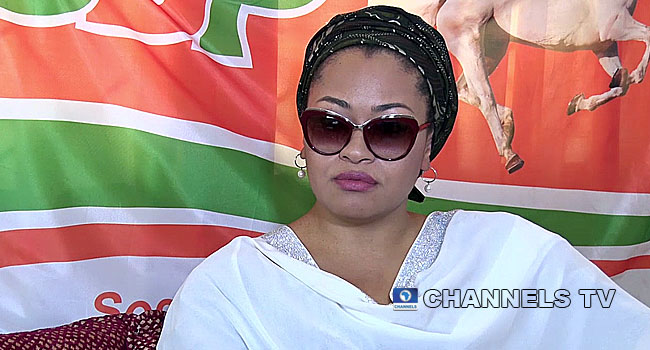 The Kogi State Governorship Election Petition Tribunal sitting in Abuja has dismissed the petition filed by Natasha Akpoti, the candidate of the Social Democratic Party (SDP) and her party against Governor Yahaya Bello.

A three-man panel of judges led by Justice Kashim Kaigama dismissed the suit in a unanimous judgment on Monday.

The petitioners had filed the suit to challenge the victory of Governor Yahaya Bello of the All Progressives Congress (APC) in the November 16, 2019 governorship election in Kogi.

Delivering the lead judgement, Justice Kaigama held that the petition failed woefully as the testimonies given by the petitioners’ witnesses amounted to hearsay, doubtful, illogical, and of no probative value.

The Tribunal, however, awarded a cost of N600,000 to be paid by the petitioners to the three respondents.

They include the Independent National Electoral Commission (INEC), the APC, and Governor Bello. 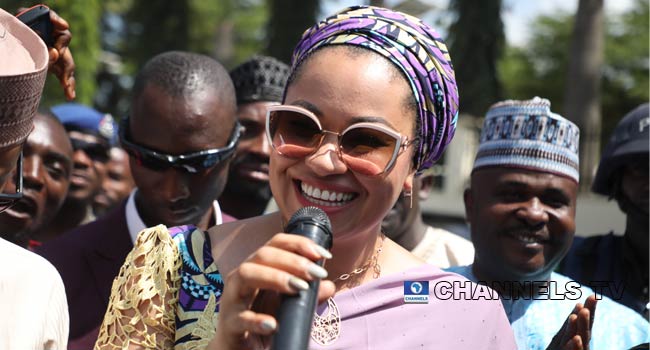 The Independent National Electoral Commission (INEC) has filed an appeal to challenge the judgement which asked that a Social Democratic Party (SDP) candidate, Natasha Akpoti, was eligible to contest the governorship election in Kogi State.

In the case filed at the Court of Appeal in Abuja, the electoral umpire stated its dissatisfaction with the judgement delivered by Justice Folashade Ogunbanjo-Giwa on November 7 at the Federal High Court in Abuja

Justice Ogunbanjo-Giwa, at the time, ruled that INEC was wrong to have disqualified Akpoti from the November 16 poll.

In her judgment, she held that INEC lacked the power to disqualify any candidate for an election as it was the exclusive preserve of a competent court of law.

The judged then granted reliefs 1 to 7 of the plaintiffs and ordered the electoral umpire to include the names of the governorship and deputy governorship candidates of the SDP, as well as the party’s logo on the ballot in the poll.

READ ALSO: The Military That Conquered Nigeria In 1966 Still In Effective Control – Opadokun

Meanwhile, the electoral umpire confirmed to Channels Television that it planned to challenge the judgement and some others, if possible up to the highest level to help strengthen the nation’s electoral system.

Akpoti and her running mate, Adams Khalid, had approached the court to challenge their exclusion from the governorship election by INEC.

INEC had refused to accept the nomination of Khalid in replacement of the earlier nominated running mate, Mohammed Yakubu.

Yakubu was replaced on the ground that he was not qualified to run as a deputy governorship candidate on account of his age.

Akpoti and the SDP were then disqualified by INEC for nominating an unqualified deputy governorship candidate. The Governorship candidate of the Social Democratic Party in Kogi State, Natasha Akpoti, has called for the cancellation of the elections in Kogi Central and parts of Lokoja, the state capital.

Akpoti wants the Independent National Electoral Commission to cancel the elections in the areas and hold a rerun on the grounds that “what happened in Kogi Central and other parts of the state was a far cry from a credible election”.

“Ballot boxes were destroyed and burnt in Okene, Adavi, Ajaokuta and Ogori Magongo and Okehi Local government areas and other parts of the state,” she said in the statement on Sunday.

“Our agents were chased away from the various polling units of the Kogi Central Senatorial District.”

For Akpoti, these incidents were enough to make INEC take drastic action.

“I am therefore calling on you and in line with your powers as enshrined in the Electoral Act, 2010 as amended to cancel the election in Kogi Central Senatorial District and some part of Lokoja and order for a rerun,” she said.

Saturday’s election had been marked by reports of violence, thuggery, harassment and intimidation with INEC condemning those incidents.

The electoral umpire had, however, said in a statement on Saturday that most of those who wanted to vote got to do so.

For Akpoti and her party’s agents and supporters, it was a different story, according to her statement.

“In some polling units, our agents were tied with ropes by APC-led thugs,” she said.

She also alleged that gun-wielding thugs supporting the APC did not allow SDP agents in Okene to come near the polling units. These thugs, she added, told voters not to come and vote unless they were to vote only APC. 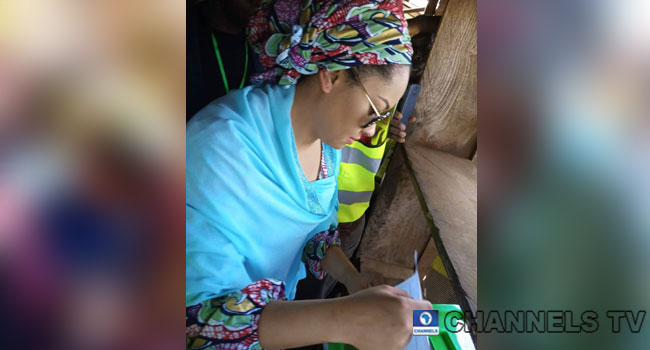 Candidate of the Social Democratic Party (SDP) at the 2019 Kogi Governorship Election, Natasha Akpoti, has cast her vote in the polls, after which she accused incumbent Governor Yahaya Bello of sponsoring violence.

Akpoti told reporters that she has the “tremendous support” of the Kogi people but is worried about the violence being sponsored by her opponent.

“I am the most credible of all the candidates and I have the tremendous support of not just people from Kogi Central, but also Kogi East and Kogi West,” she said. “And it is unfortunate that the government at hand, with due respect to the APC candidate, Yahyha Bello, has decided to take laws into his hands and sent thugs to embark on violence and attack.”

Akpoti also noted that she was concerned about the level of training exhibited by the INEC officials at the ward where she voted. 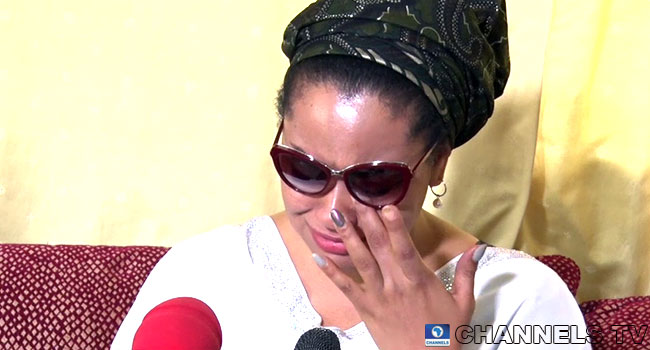 The governorship candidate of the Social Democratic Party (SDP) in Kogi State, Natasha Akpoti, says she was attacked and harassed by thugs loyal to the All Progressives Congress (APC).

She made the allegation in the video embedded above, shortly after the incident which occurred at the venue of the peace meeting organised by the Independent National Electoral Commission (INEC).

“On my way to participate in the INEC’s organised political stakeholders meeting … I was attacked and harassed by the APC thugs,” the SDP candidate alleged.

She added, “There were lots of policemen, there were over 500 men from the security agencies in different uniforms.

“I saw some young men in mufti, obviously they are thugs … the first attack was a verbal assault with a man calling me a prostitute.”

Natasha, who broke down in tears while recounting her experience, noted that some armed security operatives witnessed while she was assaulted by the hoodlums.

She, however, claimed that none of them stopped the hoodlums when the incident took place, adding that she was booed and walked out of the venue.

In a swift reaction to the allegation, the APC described the claim by Natasha as a “gallery show of falsehood”.

A statement by the Chairman of the Media and Publicity Committee in Kogi, Kingsley Fanwo, stressed that the APC does not have thugs nor need them to win elections.

According to Fanwo, thuggery is antithetical to the security policy of the Yahaya Bello administration and Kogi has developed a security architecture that has no place for violence and other forms of criminalities since 2016.

“It was on record that Natasha came late to the venue of the parley and instead of explaining her situation to the security aides of the Inspector General of Police, she decided to wrestle with them in her characteristic combative and aggressive manner,” he claimed.

At the event, which held four days to the November 16 governorship election in Kogi, was attended by the Inspector General of Police, Mr Mohammed Adamu, as well as INEC Chairman, Professor Mahmood Yakubu, among others.

The event had been going peacefully until commotion occurred when Natasha arrived at the venue and was attacked while attempting to enter the hall where the event was holding.

In the process, a fight broke out while some policemen at the venue dispersed the hoodlums with teargas which affected everyone in the hall, including the IGP and the INEC boss, as well as other dignitaries present. 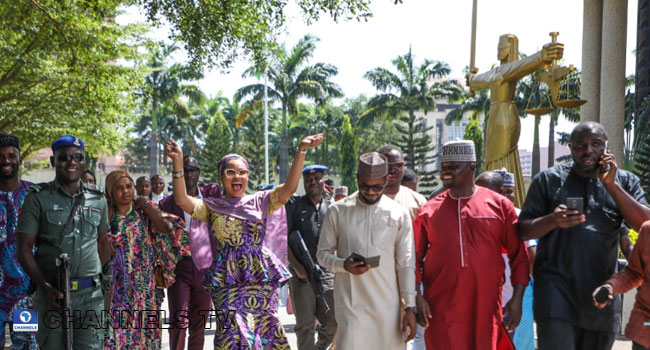 A Federal High Court sitting in Abuja on Thursday held that the Independent National Electoral Commission (INEC) was wrong to have disqualified the Kogi governorship election candidate of the Social Democratic Party (SDP), Natasha Akpoti.

A Federal High Court sitting in Abuja on Thursday held that the Independent National Electoral Commission (INEC) was wrong to have disqualified the Kogi governorship election candidate of the Social Democratic Party (SDP), Natasha Akpoti.

Justice Folashade Ogunbanjo-Giwa in her judgment says INEC lacks the power to disqualify any candidate for an election as it is the exclusive preserve of a competent court of law.

According to the Judge, the provisions of sections 31(1) and 83 of the Electoral Act which holds that INEC cannot disqualify or reject candidates nominated by a political party for an election is aimed at ensuring that it does not lie within the executive realms of INEC to determine who participates in an election.

Justice Ogunbanjo-Giwa accordingly granted reliefs 1 to 7 of the plaintiffs as she orders INEC to include the names of the governorship and deputy governorship candidate of the SDP as well as the party’s logo on the ballot in the November 16 governorship election in Kogi State.

Akpoti and her running mate Adams Khalid had approached the court to challenge their exclusion from the 2019 Kogi State governorship election by INEC.

The electoral umpire had refused to accept the nomination of Mr Khalid in replacement of the earlier nominated running mate, Mohammed Yakubu.

Mr Yakubu was replaced on the grounds that he was not qualified to run as a deputy governorship candidate on account of his age.

Mrs Akpoti and the SDP were thus disqualified by INEC for nominating an unqualified deputy governorship candidate.

The Kogi Governorship election is scheduled to hold on November 16.