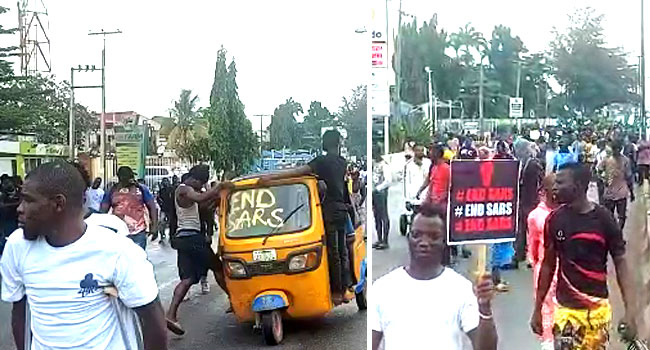 A large crowd of youths have hit the streets of the Ojodu Berger axis of Lagos State to demand an end to police brutality.

The protest, which is part of the #ENDSARS demonstration ongoing in other parts of the state, held on Saturday.

A sizeable number of protesters were seen marching towards the entry points into Lagos, chanting various solidarity songs.

They comprise young Nigerians from various walks of life, including a commercial tricycle rider who branded his trike ‘END SARS’

The protesters proceeded to the New Garage end of the Lagos-Ibadan expressway.

This has led to a gridlock on the inbound and outbound sections of the highway, leaving travellers and motorists stranded for hours.

It is more than a week since the #ENDSARS protests started with the population of protesters increasing by the day and spreading to more locations not just in Lagos, but across the country.

While some political, traditional, and religious leaders have shown their support for the protesting youths, others urged them to sheath their swords.

The protesters have, however, insisted that they would not back down as their demands were beyond the call for an end to police brutality.

They are also calling for a total reform of the police and good governance, among other demands. 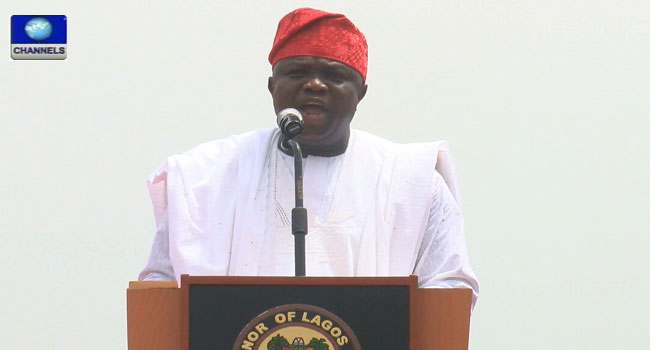 Governor Akinwunmi Ambode of Lagos State has confirmed the ban imposed on Vehicle Inspection Officers in the state.

The governor spoke on the issue while commissioning the pedestrian bridges, laybys and slip roads at Ojodu Berger.

According to him, the decision is in line with his administration’s resolve to ensure free-flow of traffic across the state.

The governor cautioned officials of the Federal Road Safety Corps to stay off the main streets of Lagos.

“Let me use this opportunity to reiterate that Vehicle Inspection Officers (VIO) have been asked to stay off our roads permanently,” he said.

“We also advise the Federal Road Safety Corps to stay on the fringes and highways and not on the main streets of Lagos. It has become evident that these agencies contribute to the traffic challenges on our roads.”

Ambode also said the state government would discourage the impounding of vehicles and use technology to track and monitor vehicle registration and MOT certifications.

He explained that the state government decided to intervene in Ojodu Berger because the area was a flashpoint for traffic congestion.

“What we set out to achieve with this project was to ensure smooth flow of traffic along the express, safeguard the lives of our people who had to run across the express and project the image of a truly global city to our visitors,” he said.

“Today, we are delighted that we have not only succeeded in transforming the landscape of this axis but with the slip road, laybys and pedestrian bridge, we have given a new and pleasant experience to all entering and exiting our state.” 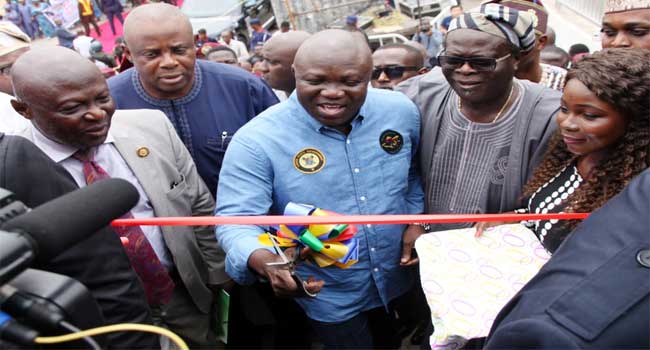 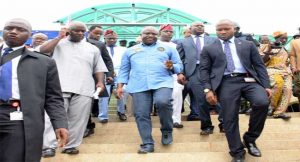 According to the governor, the intervention of the state government at Ojodu Berger followed the identification of the area as one of the major traffic flashpoints and the fact that the area is a key gateway into the state. 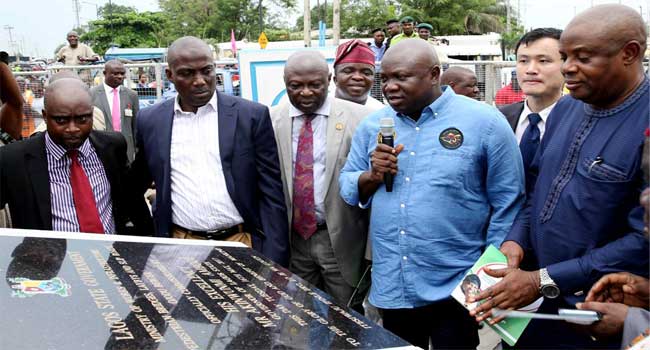 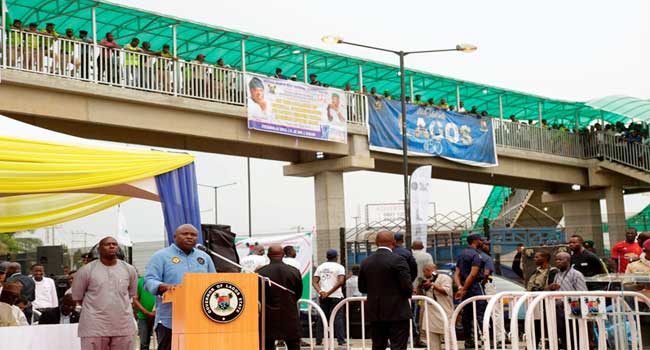 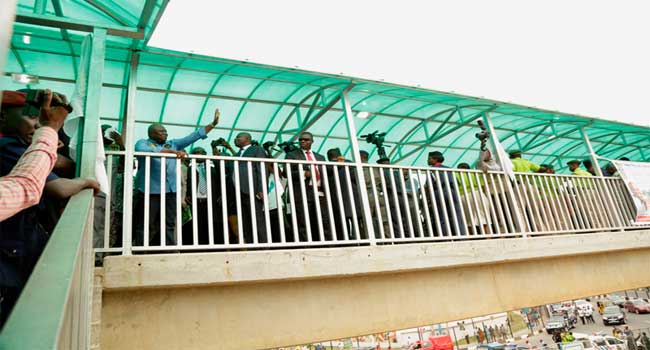 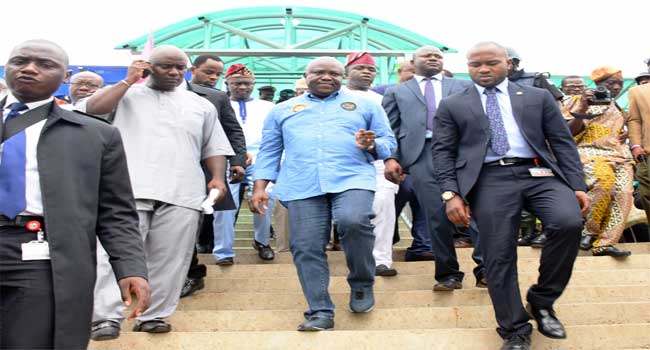 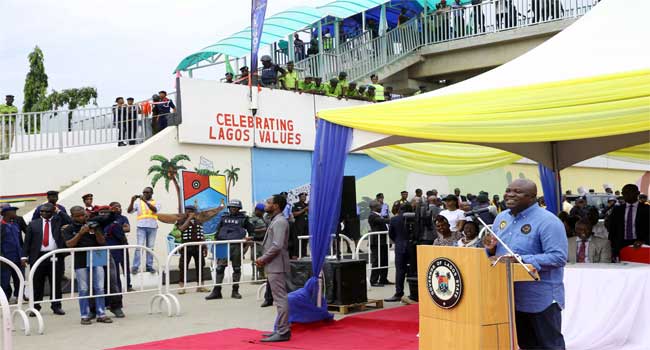 The Lagos State Police Command says it has arrested five robbery suspects in different parts of the metropolis as its onslaught on in-traffic robbers by the operatives of Rapid Response Squad (RRS) continues yielding results.

The suspects were apprehended during a special raid by the RRS operatives on robbers who were attacking and dispossessing members of the public of their valuables in traffic.

RRS investigator revealed that before the arrest, the State Commissioner of Police, Mr. Fatai Owoseni, had directed the RRS Commander to deploy more operatives to Ojodu Berger, Lekki and Oshodi in order to ensure ‘Ember’ month free crime.

It was gathered that some operatives of the RRS’s Decoy Team, in arresting one of the suspects, Azeez Yusuph, pretended to have had a broken down car under the Ilubirin Bridge around 4:23AM.

“It was very early in the morning when an undercover policeman pretended as if his vehicle broke down on the bridge while some of his colleagues hid somewhere to ambush the robbers who would come and harass the lone occupant of the vehicle…. The suspect showed up few minutes trying to collect handset and money from him, that was when we arrested him,” the source said.

He hinted that the operatives also got complaints from members of the public on RRS social media platforms about the activities of miscreants on road users with broken down vehicle in Ilubirin.

Abdullahi confessed to interrogators “I was trying to make ends meet by snatching valuables of stranded drivers on the bridge,” adding that he sleeps underneath the bridge along with his colleagues.

In his confessional statement to interrogators, another suspect, Oyeleke Abdullah, a danfo driver revealed, “I snatched a Zeltel phone from a passenger around 9:00PM on Saturday…. There was traffic entering Lagos on Saturday at Berger, I decided to use that opportunity to snatch handset and other valuables from commuters. My colleague and I do this whenever we need money.”

Another suspect, Saheed Alayande, who was arrested in Oshodi disclosed that he was a bus conductor in Oshodi. “Whenever I am not doing that, I carry load and wares for people with my friend. It was here that I stole the phone that I was caught with before I was arrested.”

Confirming the development, the Police Public Relations Officer, Superintendent Dolapo Badmos, said that the Command was on high alert to curb social miscreants who exploit traffic situations in the metropolis to dispossess Lagosians of their valuables on the road.

The suspects have been transferred to State Criminal Investigation Department (SCID), Yaba, for further investigation. 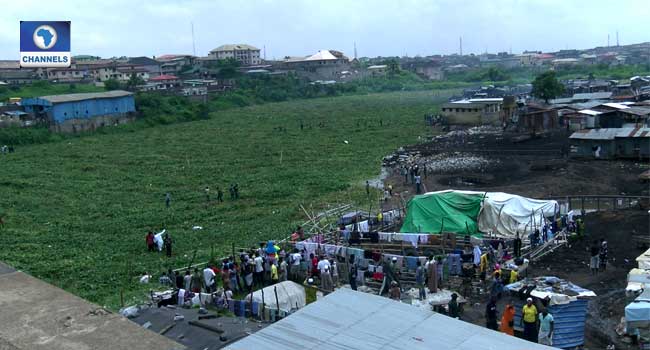 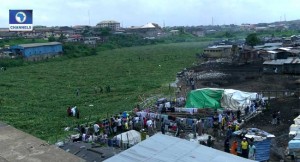 The Deputy Vice Chancellor of University of Lagos, Professor Oluwatoyin Ogundipe, has blamed human activities for the water hyacinth at the Ogun River.

He said this while leading a team of researchers from the University for a Field Work.

“Because of human activity going on there is on the increase, you have animals and other things they are working on being dumped in the river.

“You also have construction work going on here and the people throw some of the bamboo inside the river and because of that you have that blocking the pathway which the river is supposed to flow and pass the foot of the bridge.

“With that we have the accumulation of water hyacinth which has formed a mat on the river”, he said

The field work, he says, is to throw light into the phenomenon that led to the accumulation of water hyacinth around the base of the Berger Bridge.

Professor Ogundipe who blamed it on human activities, called for a close watch of what goes on around that area.

The Ogun River flows under the Kara Bridge around Ojodu Berger area of Lagos.

A part of the popular Ogun River which flows under the Kara Bridge around Ojodu Berger area of Lagos State has suddenly gone dry.

Unidentified green plants are seen on the river while the water body has given way.

The Kara cattle market community under the bridge along the Lagos-Ibadan expressway has become a Mecca of some sort with residents of the community and passers-by trooping to see the dried section of the river which once provided water for the Kara cattle and ram market.

Traffic in bound Lagos slowed down and Road Safety officials tried to make light the gridlock.

Before the unusual incident, the water body once served as means of transportation for canoe owners but residents say they woke up to see the channel blocked on Saturday morning.

There were initial suspicion that this could be water hyacinth but the surface of what used to be the flowing river had become a firm ground.

Some people were seen testing the solidity of the green that has taken over the waterway by walking across the river and some found it a readymade recreation ground.

Surprisingly, on the other side of the Kara Bridge, the river was seen flowing freely.

Environmentalists have, however, warned that residents keep off the blocked channel for the risks of it opening up unexpectedly and advised relevant authorities find a means of clearing the plants.