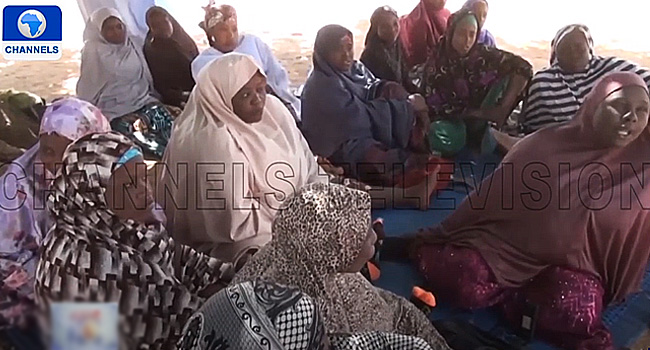 Parents of the abducted Government Science Secondary School students in Kankara area of Katsina State have converged on the premises of the school patiently waiting for their children to return as promised by the government.

Their gathering is coming less than one week after the abduction took the nation by surprise.

The parents have also been recounting their experiences as they continue to hope for the return of their children.

Speaking to Channels Television, two of the parents said they couldn’t sleep, adding that they will continue to be spending the night at the school until their children are rescued safely.

Upon arrival at the school gate on Tuesday, Channels Television discovered that the Ƙanƙara school is located at the centre of a bush leading to some scattered settlements some of which are Zango and Dansabau in Zamfara border axis.

It also gathered that besides the school fence is a busy road leading to Ƙanƙara weekly Tuesday Market with daily business activities on the increase.

Earlier today, 17 of the abducted 333 students returned home after escaping from their abductors, leaving 316 of them still in the captivity.

The media aide to Katsina State Governor, Aminu Masari said the bandits have warned that security operatives who were monitoring their hideouts with helicopter must stop the action.

This account seems in conflict with reports saying that the terrorist group, Boko Haram, has claimed responsibility for the abduction of the students.

The group’s leader, Abubakar Shekau, made the claim in a voice message, stating that they went for the students to promote Islam and discourage western education.

Tuesday’s claim of responsibility marks a major turning point in the advance of jihadist groups in northwest Nigeria.

Boko Haram, and a splinter group, the Islamic State in West Africa Province (ISWAP), are waging an insurgency in the northeast and are thought to have only a minor presence in the northwest.

But concerns have grown of jihadist inroads into the region, especially after fighters claiming to be in the northwest released a propaganda video pledging allegiance to Abubakar Shekau earlier this year.

South Korea issued a raft of measures Friday to try to reverse one of the world’s lowest birth rates, offering potential parents increased benefits as it faces a looming population decline.

The country’s fertility rate — the number of children a woman is expected to have in her lifetime — fell to 0.95 in the third quarter, the first time it has dropped below 1 and far short of the 2.1 needed to maintain stability.

As a result of the population of the world’s 11th largest economy, currently, 51 million, is expected to start falling in 2028.

There are multiple causes, including the expense of child-rearing, long working hours, limited daycare, and career setbacks for working mothers, who bear a double burden of carrying out the brunt of household chores.

The government has spent a whopping 136 trillion won ($121 billion) since 2005 to try to boost the birth rate, without success.

In its latest attempt to reverse the decline, Seoul said Friday it would expand child subsidies — of up to 300,000 won ($270) a month — to the richest 10 percent of families, who are currently excluded.

From late next year, parents with children younger than eight will be able to work one hour less each day to take care of their offspring,  while paid paternity leave entitlements will rise from three days to 10.

But only 13 percent of South Korean men take up the entitlement, with many more fearing that doing so would raise questions about their commitment to their employers.

The ministry also said it would build more daycare centres and kindergartens with the goal of enabling 40 percent of children to use them.

“This package is to focus on giving hope to people aged in their 20s to their 40s and to make certain that their quality of life does not deteriorate when opting for marriage and childbirth,” said Kim Sang-hee, vice chairwoman of a presidential taskforce to tackle the low birth rate. 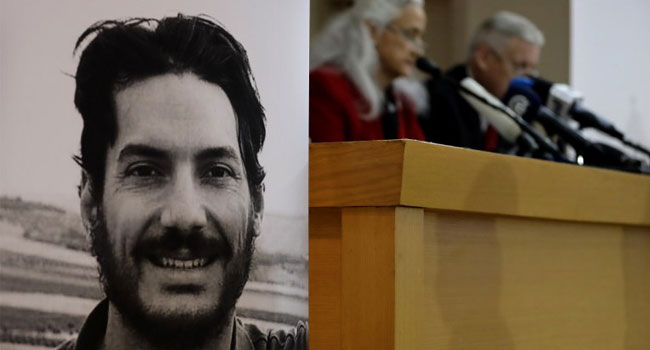 The parents of American journalist Austin Tice, who was abducted in Syria more than six years ago, said Tuesday they were encouraged by US efforts and new details about their son’s fate.

Tice was 31 when he disappeared in August 2012 near Damascus and his whereabouts remain a mystery.

But the US special envoy for hostage affairs, Robert O’Brien, said last month there was every reason to believe the journalist was alive and still detained in Syria.

His father, Marc Tice, who together with his wife Debra has relentlessly campaigned for his release, said Tuesday that President Donald Trump’s recent success in securing the release of Americans detained abroad was a source of hope.

“We’re very encouraged under this new administration,” he told reporters in the Lebanese capital Beirut, adding that it had “shown and developed a track record of bringing back Americans held overseas home.”

He cited the three Americans who were released by North Korea in May and the US pastor Turkey freed in October.

Neither the Syrian government nor any other entity has confirmed holding Austin Tice, but his father said: “We do believe however that the Syria government is best placed to help us get Austin safely home.”

The journalist’s parents said they had not received any proof of life since a 2012 video but Marc Tice stressed that there was a “consensus among all those working on his case” that his son was alive.

The couple said people whom they could not name had come forward with information on their son.

“We have recently been contacted directly by credible individuals who have shared information about Austin,” Debra Tice said, without elaborating.

Austin Tice’s parents said that they had made some useful contacts among the millions of Syrians who fled their country since the conflict erupted in 2011.

“Time is an ally,” Marc Tice said, adding they were hoping for leads from “people that feel that their situation is secure and that they are free and less at risk in sharing that kind of information.”

They also said that the million-dollar reward offered by the FBI for information leading to Austin Tice’s safe return — which a coalition of media and other organisations recently announced they would match — was also a positive factor. 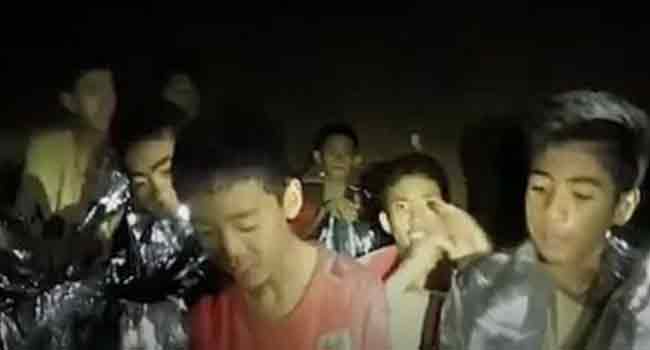 Four members of a Thai youth football team guided out of a flooded cave complex will not be allowed physical contact with their parents until the risk of infection has gone, the chief of the rescue bid said Monday.

“They (the four) will be kept away from their parents for a while because we are concerned about infections,” Narongsak Osottanakorn told reporters, adding doctors will decide on family visits “at a distance or through glass.” 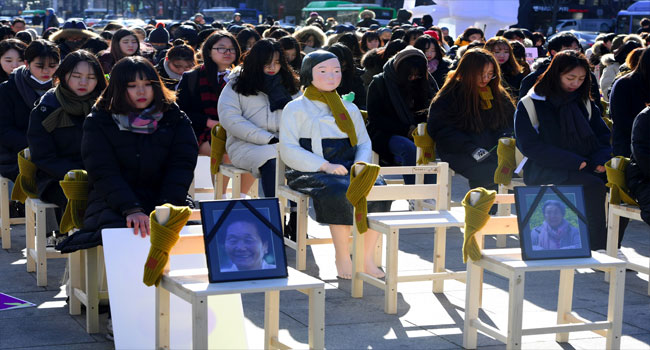 A Japanese couple have been arrested after allegedly imprisoning their daughter for more than 15 years before she froze to death aged 33 this month, local media reported Wednesday.

Osaka residents Yasutaka Kakimoto, 55, and his wife Yukari, 53, admitted to locking their daughter Airi in a small room from the age of around 16 or 17, Kyodo News said.

An autopsy showed Airi had frozen to death and was extremely malnourished, weighing about 19 kilogrammes (42 pounds).

The parents told police they confined their daughter because she was mentally ill and acted violently, national broadcaster NHK said, adding that the room had an intercom that the family used to communicate.

They reportedly fed their daughter about once a day.

The parents also kept more than 10 surveillance cameras around their house in a possible attempt to hide their secret, according to newspaper the Yomiuri Shimbun.

After reporting her death to police, the couple were initially charged with illegally disposing of a body but police were also considering other charges including confinement, Kyodo said.

Osaka police did not immediately respond to requests for comment Wednesday evening. 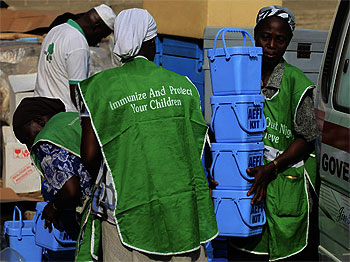 The Senate has urged state governments and relevant Federal Government agencies to intensify campaign on the need for parents to vaccinate their children against measles and other killer diseases.

The Senate gave the advice following a motion on the outbreak of measles in the northern part of the country.

Senator Danladi Sankara who moved the motion said that 36 children have lost their lives so far and about 3,588 children are in various hospitals in the north as a result of measles. 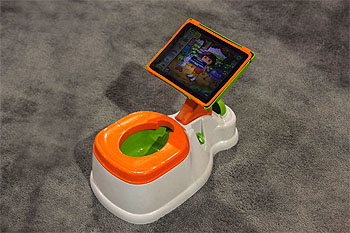 This is coming across to parents as soothing and relieving news especially mothers because technology decided to look their way to aid them in the area of toilet-training.

Thanks to CTA Digital as it introduces iPotty for iPad for kids who are yet get toilet training.

Basically it is a potty trainer with an iPad stand built into it. The iPotty is compatible with Apple’s iPad2, iPad3 and fourth generation of iPads and is designed to engage kids who feel it difficult to stay at the same spot for too long.