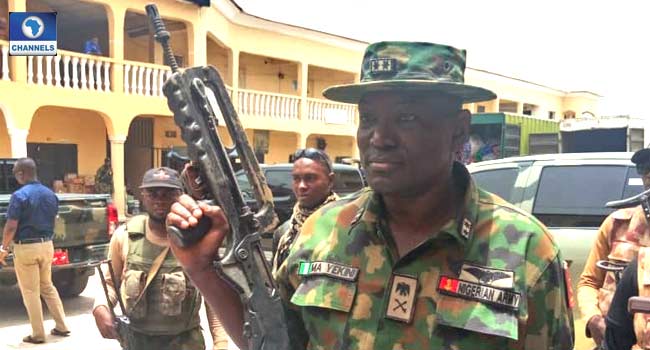 The Nigerian Army has vowed to arrest perpetrators of Sunday’s attack on Numa Kochu village in Akwanga Local Government Area of Nasarawa State.

In its Operation Whirl Stroke covering Benue, Nasarawa and Taraba states, troops have been directed to work with other security agencies in the state.

“We don’t really have troops there at Akwanga as we speak but there are other security forces on the ground there.

“What we have done is to be collaborating with them.  I have directed my troops to move to Akwanga and join other security forces to track down the perpetrators of this crisis, let us apprehend them so that justice can be done,” he stated.

According to him, the military has carried out nine major successful operations Obi, Doma, Toto and Awe local government areas of the state.

Yekini explained that 37 assorted weapons including a clarion 5.56 Israeli commando assault rifle, 389 ammunition, 1 grenade and local charms were recovered from the attackers during the operation.

While noting that a number of persons were killed, he, however, stated that 11 persons were arrested and others at large.

Although the Commander didn’t disclose the number of dead persons, he vowed to trail those bandits said to be on the run.

Meanwhile, the local vigilantes have arrested three persons in connection with the recent attack.

An elder from the area who craved anonymity told Channels Television via telephone said the persons attacked the village shooting sporadically in air, and when chased by the locals they ran into the forest and hid their weapons.

He added that upon their arrest, they were to the police station in Akwanga.

“I got a call from the community after the incident when I got there. The persons were already arrested by the people of the community. They told me they came and were shooting guns.

“Immediately they saw the people they started running to the bush. The people pursued them and caught them there.  Now we are trying to see if we can go into the bush to get their guns.

“They are three in numbers and they are not Fulanis, they are our brothers.  Their names are Blani Zaman Gbugar, Garba Musa Amos and Ridan Labari,” he stated. 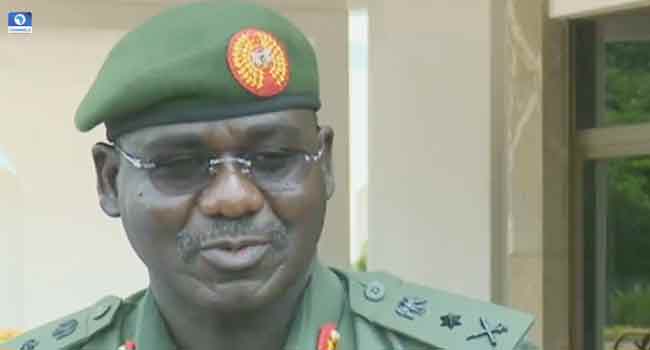 The Nigerian Army has vowed to track down the perpetrators of Birnin Gwari attacks that left at least seven dead and five others injured.

Chief of Army Staff (COAS), Lieutenant General Tukur Buratai said the army would collaborate with other security agencies in dislodging miscreant believed to be hiding.

Buratai stated this in Abuja, the nation’s capital on Thursday after a closed-door meeting with President Muhammadu Buhari at the Presidential Villa on the state of security in the country.

“We will continue to operate with other security agencies that have been charged with the responsibility of securing our country,” he said.

The COAS further expressed the optimism of the gradual return of the Internally Displaced Person (IDPs) to their respective communities.

He added, “And the deployment of the unit there is quite strategic. It is in line with the Nigerian Army Order of Battle that was approved in 2016 and we are going to implement all of them to achieve the strategic objectives of the government.

“That is essentially why we have to put the battalion there and they will work along with other security agencies and be rest assured that Operation Last Hold will further consolidate on the achievements so far in the North East.”

Buratai’s comments come less than 24 hours after reported attacks on the affected community in Kaduna State by armed bandits.

The attacks follow the COAS inauguration of a two Battalion Forward Operation Base (FOB) in the state to complement the efforts of the police.

The spokesman for the State Police Command, Muktar Aliyu, had told Channels Television on Wednesday that the armed bandits invaded Mashigi, Dakwaro, Sabon Gida villages and started shooting sporadically, burning down houses and farmlands in an operation which the residents said lasted for over three hours.

Hundreds of people including security operatives have been killed and several others abducted in Birnin-Gwari in the past one year in series of attacks by armed bandits.

These repeated attacks which seem unabated is now giving the residents of the area sleepless nights as they are worried about their safety. 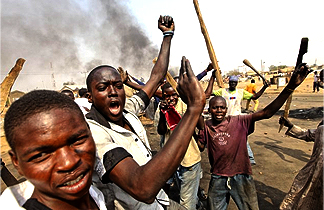 Following the clashes in Gwagwalada, the Minister of the Federal Capital Territory, Bala mohammed has visited the site of the violence after which he had a meeting with the warring factions today in Abuja said a committee is being set up to investigate the immediate and remote causes of the incident and that all those behind the Gwako clashes which left two people dead will not be spared.

At that perpetrators of the incident will be severely punished according to the laws of the land.

Already 1,000 dislodge people are at the moment being taken care of by NEMA, at the University of Abuja where the displaced people are taking refuge.

The minister also visited some of the displaced at the permanent site of the University of Abuja.

Recalling the history of traditional cordial relations between farmers and cattle rearers, he appealed to them not to take any action that would be seen as reprisal attacks.

The Minister, who inspected the site of the incident in the company of senior military and police officials, announced that relief materials including food, potable water and beddings had been sent to the displaced people.

He also urged the conflicting communities to work at restoring peace and harmony, and provided assurances that measures are being taken to ensure the security of life and property in the area.