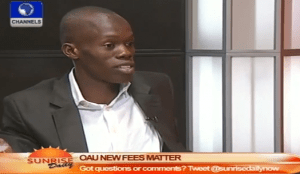 The President of Obafemi Awolowo University Students Union, Ibikunle Isaac, has complained about the recent increment of school fees for fresh students and post graduate students.

While complaining about the increment, he revealed that the school announced a rise that amounts to about 320% stating that fresh students’ fees had been increased from N17, 000 to N100,000.

He also added that about 3 years ago, the acceptance fee into the school was increased from N2,000 to N20,000.

Speaking on Channels Television’s breakfast programme, Sunrise Daily, Mr. Isaac revealed that the school receives funds from different sources and the World Bank recently allocated about $8million to the school, in addition to the school also generating funds from other businesses like the pure water and bread making factories in the school.

So, he wondered what the justification could be for the high increment, if the school would not explain how it spends all the monies it receives from the different sources.

He complained of the lack of power supply in the school and stated that the Senate of the school, rather than address the students’ problems, went ahead to announce the increment without communicating with the students.

Mr. Isaac noted that the student union was supposed to know about the increment of fees.

“If there is going to be any increment then the union must be involved.

“We want to know how much – every kobo – spent in the school”, he said.