Nigerian Military Has Been Disempowered To Perform-Security Expert 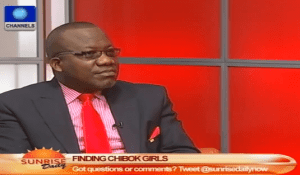 A Security Consultant, Femi Adegbulu, says that the military has been disempowered to do what they are trained to do, in fighting terrorism and not “that they are not capable”

Speaking as a guest on Channels Television’s breakfast programme, Sunrise Daily, Mr Adegbulu cautioned Nigerians not to pressurise the military into doing something that is unprofessional.

Referring to the statement made by the military that the abducted Chibok girls have been sighted, he stated that such information leak may lead to relocation of the girls. “The military should not forget that these insurgents have access to the internet, sometimes they even have more equipment than we have,” he stressed.

Mr Adegbolu added that there had been conflicting reports by the military about the insurgents, “today we hear that the leader of the sect is dead, tomorrow we hear that they have released some girls or they have sighted the girls, all these reports are just conflicting.

“The earlier we accept that Nigeria is at war the easier it will be for us to tackle the insurgency.”

He advised that the government should look inwards that there might be people behind the attacks.