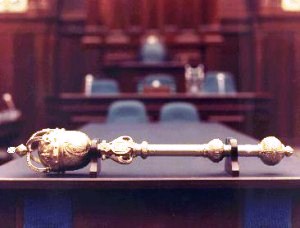 The Edo State House of Assembly has suspended four lawmakers on allegations of gross misconduct.

Three of them were those who defected from the APC to the PDP and the fourth suspended lawmaker is the Deputy Speaker of the House who is a member of the APC.

The House had resumed from its recess on Monday morning and under matters of urgent public importance, raised a motion for the suspension of the lawmakers.

The Majority Leader of the House, Philip Shaibu, said that the lawmakers were suspended for trying to induce with 50million Naira each to impeach Governor Adams Oshiomhole and the Speaker Uyi Igbe.

He maintained that the House acted according to its rules.

Simultaneously, over a thousand APC youths were protesting outside the gates of the Edo State House of Assembly, calling for the resignation of the lawmakers who defected, alleging that they collected between 35 and 50 million Naira each to defect.

The Speaker received them after the business of the day. They were also received by Governor Adams Oshiomhole at the Government House.

However, the Edo State Police Commissioner has urged politicians to conduct themselves peacefully in the course of their activities.