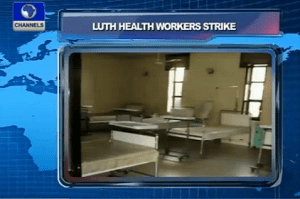 Striking resident doctors and other health workers at the Lagos University Teaching Hospital, Idi-Araba have suspended their over two weeks industrial action, resuming duties on Thursday.

The suspension was based on the intervention by the Ministry of Labour and Productivity, who signed an agreement by both parties after most of the issues had been resolved.

The President, Association of Resident Doctors, LUTH, Dr. Olubunmi Omojolowo, said that the management has reduced  some of the prices of operations carried out; such as minor surgical fees, to less than 50% of their present rates. He cited situations where they have been reduced from 50,000 to about 22,000 to be affordable to most Nigerians.

He also noted the tenure of the residency training, stating that the management has written to resident doctors to clearly specify their tenures and implement the circular by the Federal Government as soon as it arrives.