Jonathan In Closed Door Meeting With Emir Of Kano 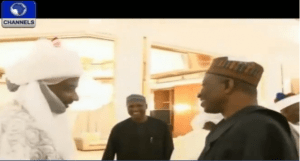 President Goodluck Jonathan, before heading to pick up nomination forms at the PDP headquarters on Thursday, held a closed door meeting with the Emir of Kano, Sanusi Lamido Sanusi, in the Presidential Villa.

The Emir was accompanied to the meeting, which lasted  for one hour, by members of the Kano Emirate Council.

This was the second time Sanusi would be visiting Jonathan since he became the Emir of Kano.

Sanusi, alongside other northern traditional rulers led by the Sultan Of Sokoto, Mohammad Sa’ad Abubakar III, had visited the Presidential Villa on July 23 to break the Ramadan fast.

Sources say that Jonathan and Sanusi met to see how they could resolve their differences.

FG To Collaborate With States To Domesticate Child Rights Act, Others