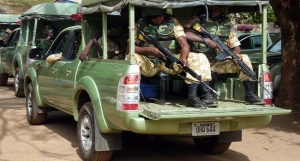 The One Division of Nigerian Army and other security agencies in Kaduna State held a ‘Show of Force’ on Sunday, displaying their readiness for Saturday’s Presidential election.

The security personnel comprising Policemen, Army, Navy, Air Force and other paramilitary agents patrolled major roads and streets in the state capital with patrol vans and Armoured Personnel Carriers to demonstrate their combat readiness ahead of the elections.

The General Officer Commanding One Division of Nigerian Army, Major General Kenneth Osuji, explained that the combined Show of Force was to test their capability and preparedness ahead of the elections, assuring Nigerians that they are ready to contain any situation the during elections.

The blaring of siren by the security personnel took residents of the area by surprise, as some of them initially mistook their presence for a distress response to an emergency situation.

They patrolled along violence prone areas – Tudun Wada, Gonin Gora, Rigasa, Ungwan Rimi and Sabon Tasha areas among others. Most of them were placed on strategic areas, showing how they would be positioned during the elections to ensure they nip in the bud any possible violent situation during the polls.

The security agents are to increase surveillance of all flashpoints, entrance and exit points around the state before, during and after the elections.

Major General Kenneth Osuji also warned that the security agents would deal with anybody who may want to cause trouble before, during and after the election.

He said that the officials were prepared for the elections.

Kaduna was among the states in Nigeria that witnessed post-election violence in 2011.

It is just six days to the commencement of the general elections and the combatant readiness of the security forces, residents are hoping to witness a violent free polls.