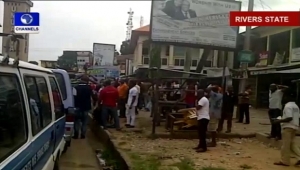 Some supporters of the All Progressives Congress (APC) in Rivers State in southern Nigeria  are protesting against the conduct of Saturday’s election in the state, declaring their dissatisfaction with the process.

Protesters in their thousands walked the streets in the State capital, Port Harcourt, on Sunday, causing heavy traffic.

They broke through the security barricade and walked towards the office of the Independent National Electoral Commission.

No election was held in Rivers State, they said, demanding that the exercise should be cancelled and rescheduled.

The APC supporters said the rules of the election were broken and the election reflected nothing that suggests true democracy.

Eyewitness told Channels Television that the situation in the state was ‘very tense’.

Channels Television correspondent, Emmanuel Ereyi quoted the leader of the group as saying that they had gathered over 50,000 supporters of the APC for the protest.

According to Ereyi, the protest has been peaceful.