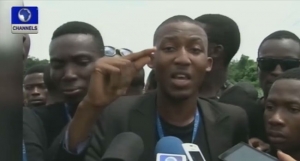 Students of the Olabisi Onabanjo University (OOU), Ago Iwoye, have held a protest at the scene of the fatal road accident which claimed the lives of 11 students of the institution.

The students, dressed in black attires, also held prayers for the repose of their former colleagues killed last week in a ghastly motor accident at the Ilisan area of Ogun State, along the Benin/Ore express road.

Backed by security operatives, they drove down to the scene of the accident in five buses of the institution.

The students were held in unison as they mourned the departed. Christian and Muslim prayers were offered for the repose of their dead colleagues. 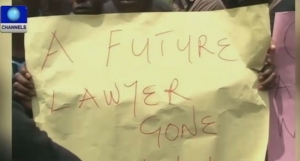 While demanding justice for the lives lost, the President of the Student Union, Adegbesan Adenola, handed down a seven-day ultimatum to the government to bring the ‘killer-driver’ to justice, just as they demanded immediate investigation to unravel the circumstances surrounding the accident and the alleged culpability of security agencies around the area.

After all, the students proceeded to the private company whose truck was believed to have wrecked the havoc, forced the gate opened and vandalised some of the company’s property, including vehicles..

Goal-Shy Cameroon Bank On Ekambi In Mega Clash With Nigeria