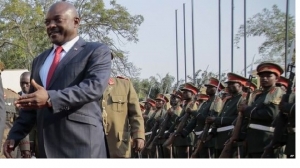 People in Burundi have cast their votes in tension over President Pierre Nkurunziza’s decision to stand for a third consecutive term.

Presently, the votes are being counted under three-quarters of the country’s 3.8m eligible voters who turned out on Tuesday after a night of gunfire and explosions that claimed lives.

Ballots would continue to be tallied on Wednesday, but officials have said that they do not expect the results to be announced until Thursday.

Shortly before voting started on Tuesday, a policeman and a civilian were killed amid a string of explosions and gunfire in the capital Bujumbura, the epicenter of three months of anti-government protests.

The body of an opposition official was found earlier on a road.

The US State Department had joined critics in saying the election lacks credibility.

Meanwhile, the government accused the opposition of provoking violent protests.

President Nkurunziza is running for a third term despite a limit of two terms in the constitution.